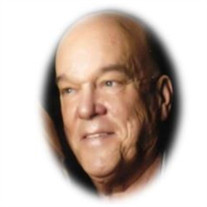 Albert Charles Evans, 76 of Essexville, our devoted, loving, and caring husband, father, grandpa, and good friend to many passed away peacefully after a long courageous battle with cancer on Wednesday, November 24, 2021, surrounded by his family. Albert was born on February 14, 1945, in Bay City to the late Albert Luke and Virginia (Rase) Evans. He graduated from Handy High School in 1963 and proudly served his country in the United States Navy from 1966 until 1969. Albert met the former Sandra Kay Smrecak while bowling; they dated, fell in love, and were married for over 50 years. Albert worked for Michigan Bell and retired from ATT after 30 years of dedicated service. He enjoyed baseball and was one of the best catchers in Bay City; there wasn’t a baseball mitt in Essexville that he didn’t repair. He played for the Bay County American Legion baseball team, and they were inducted into the Baseball Hall of Fame. Albert loved coaching baseball and the little league teams. You could also catch Albert on the football field marking lines and doing chain stats. To carry on his legacy, Albert leaves his loving wife, Sandra; sons, Todd Evans and Brian (Nancy) Evans; grandchildren, Jacob and Justin Evans, and his sister, Janice Kennedy. Along with his parents, Albert was preceded in death by his brother, Gary Evans and brother-in-law, Robert Kennedy. Albert’s family will be present to receive visitors on Tuesday, December 28, 2021, at Skorupski Family Funeral Home & Cremation Services, 821 N. Pine Rd., between Ridge & Center from 12:00 Noon until his 5:00 PM Military Honors Ceremony. In lieu of flowers, the family ask that memorial contributions be directed to the wishes of the family. Expressions of sympathy may be made online at www.skorupskis.com.

Albert Charles Evans, 76 of Essexville, our devoted, loving, and caring husband, father, grandpa, and good friend to many passed away peacefully after a long courageous battle with cancer on Wednesday, November 24, 2021, surrounded by his family.... View Obituary & Service Information

The family of Albert Charles Evans created this Life Tributes page to make it easy to share your memories.

Send flowers to the Evans family.