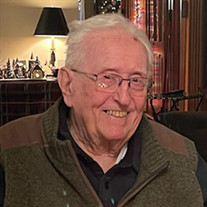 Our beloved Arthur J. Oettmeier Jr., passed away this Valentine’s Day, 2022. He was the delight of Arlene M. (Harck) Oettmeier’s life for 71 years, thus enabling this day to represent the sweet essence of a marriage filled with love and memories. The son of late Arthur and Marion (Collins) Oettmeier, Art grew up in Ft. Atkinson, Wisconsin, with his two older sisters, Priscilla and Marge. We were always entertained by the numerous stories each of them shared with us about their lives and experiences. Art served with the U.S. Army during WWII. Upon being honorably discharged, he attended Stout Institute (now University of Wisconsin-Stout) where he met the love of his life, Arlene, whom he married in 1950. On March 31, 1951, Art became a Master Mason, resulting in him dedicating significant portions of his life toward helping other people and making charitable contributions for the betterment of mankind. During this same time, Art earned his bachelor’s degree from Stout Institute in Industrial Education. Shortly thereafter, they headed to Memphis, Tennessee, where he taught at the William R. Moore School of Technology for a brief time. They then moved to Big Rapids, Michigan, where he became the first instructor hired to launch Ferris Institute’s (now Ferris State University) automotive courses, which to this day has grown to become the Automotive Service Technology component of the University. This was followed by a move to Schoolcraft College in Plymouth, Michigan, where he was a teacher while earning his master’s degree from the University of Michigan. He was then recruited and hired to serve at Delta College, University Center, Michigan. During his tenure he worked in multiple capacities as the Dean of Academic Affairs, the Dean of Occupational Programing, and as the Director of Cooperate Services. He retired from Delta College in 1991. He loved his family, he loved education, and he loved to tell stories about a multitude of experiences. He was a principled person and always held firmly to his beliefs. While education was his professional passion, his beloved hobby was working with wood, ranging from many home remodeling projects to building furniture and framing pictures, ultimately forming a small company called Pine Tree Products. During his retirement, they enjoyed thirteen delightful vacation cruises, visiting various places throughout the world. Later he developed a keen interest in the workings of the stock market and was determined to learn all he could about it. His love of learning, truth and honesty were the foundation and the building blocks for his family. He encouraged growth and always inspired his children to follow their dreams wherever they may lead. He is survived by his loving wife of 71 years, Arlene; his children, Tim (Janice) Oettmeier, Kim (Lee) Galloway, Arthur J. Oettmeier III, and Tami (Greg) Feinauer; five grandchildren, Erik (Sara) Galloway, Justin (Laci) Oettmeier, Mandy (Richard) Walls, Nick Feinauer, Ally Feinauer, and Charity (Rob) Galloway-Djerf, and six great-grandchildren, Damon, Arya, Camden, Cadence, Callen and Luke. He was preceded in death by his two sisters Pricilla (Clyde) Schap and Marge (Warren) Parker. Art was welcomed home by his parents on this beautiful sunny day. Private arrangements have been entrusted to Skorupski Family Funeral Home & Cremation Services, 821 N. Pine Rd., between Ridge & Center. Memorial contributions may be made to the Toni and Trish House at P.O. Box 125, Auburn, MI 48611-0125. Expressions of sympathy may be shared with the family online at www.skorupskis.com.

Our beloved Arthur J. Oettmeier Jr., passed away this Valentine&#8217;s Day, 2022. He was the delight of Arlene M. (Harck) Oettmeier&#8217;s life for 71 years, thus enabling this day to represent the sweet essence of a marriage filled with love... View Obituary & Service Information

The family of Arthur John Oettmeier Jr. created this Life Tributes page to make it easy to share your memories.

Our beloved Arthur J. Oettmeier Jr., passed away this Valentine’s...

Send flowers to the Oettmeier family.