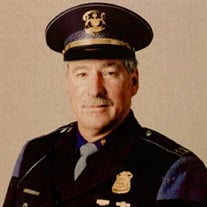 Wade Edward Schaefer, a retired Captain of the Michigan State Police, 77, of Essexville, our honorable, caring, hardworking, and devoted husband, father, grandfather, brother, uncle, and friend was born into eternal life on the morning of Saturday, July 18, 2020 at his home. Wade was born in Bay City on June 4, 1943, the son of the late Edward and Helen (Easter) Schaefer. Wade began his career as a police officer with the City of Bay City in 1964. On July 6, 1965, Wade enlisted with the 58th Trooper Recruit School of the Michigan State Police. He served at posts in Flat Rock (1965), Sandusky (1967), and Bridgeport (1973). In 1973, Wade was promoted to Detective Sergeant and assigned to the Intelligence Section in Detroit, where he worked as an undercover officer. In 1974, he transferred to the Fire Marshal Division, Flint Office. In 1977, he was promoted to Special Lieutenant and assigned to the General Facilities Unit at Fire Marshal Division Headquarters. He also served as Commander of the Public Assemblage and Health Care Units. On June 21, 1981, he was promoted to First Lieutenant and assigned as Commander of the Enforcement Section, where he served until January 5, 1987, when he was promoted to Inspector, Assistant Commanding Officer of the Fire Marshal Division. On June 24, 1990, he was named Commanding Officer of the Fire Marshal Division. In 1993, Wade met the former Debra Mary Pratt in Topinabee, Michigan. They dated, fell in love, and were united in marriage on June 7, 1997. Wade retired in March of 1999 as the State Fire Marshal. He was the former President of the Michigan Arson Prevention Committee, Second Vice President of the Fire Marshals Association of North America, and on National Fire Protection Association Technical Committees. Throughout his tenure, Wade was instrumental in forming and implementing several programs and policies for the betterment of the people. Wade was a lifelong and faithful Catholic, completing the Lay Ministry program with the Diocese of Saginaw in 2005. He was a member of the Knights of Columbus and a faithful parishioner of St. Jude Thaddeus Parish. Be it at work or tending to his garden, Wade was known for his meticulous attention to detail. He enjoyed vegetable gardening, playing softball, camping, gun collecting and shooting, his membership with the NRA, puzzling, and vacations to the Caribbean. Wade was most proud of his family, the two homes he built, and his service to the community and the church. His legacy will live on in the hearts of his family and friends for generations to come. In addition to Debra, Wade's wife of 23 years, he is survived by his children: Carrie Schaefer, M.D. (David Monschein), Cheryl Schaefer, Kendra Schaefer, D.M.D., Amber Erdman, and Nora Metevia. Wade was the proud and loving grandpa of Sam and Emma Monschein, Tavish Kennedy, Jayda and Noah Erdman, and Breanna Lango. Also surviving are Wade's brothers, Gary (Beulah) Schaefer, Richard (Yvonne) Schaefer, Randall (Mary) Schaefer, Brian Schaefer (Cindy Farrell); brothers-in-law, Daniel Pratt and Richard (Christine) Knoblock, along with many nieces, nephews, colleagues, and friends. In addition to his parents, Wade was preceded in death by his father-in-law and mother-in-law, Helen and Roy Pratt. Wade's family will be present to receive visitors on Friday, July 31, 2020 from 10:00 AM until Wade's 11:00 AM Memorial Liturgy at St. Jude Thaddeus Parish (St. John the Evangelist Church), 614 Pine St., Essexville. Fr. Dale Orlik will officiate. To veiw the live stream please click the following link https://client.tribucast.com/tcid/75010263. As a lifelong supporter of Catholic education, memorial contributions in memory of Wade may be directed to All Saints School. Final arrangements have been entrusted to Skorupski Family Funeral Home & Cremation Services, 821 N. Pine Rd., between Ridge & Center. Expressions of sympathy may be shared with the family online at www.skorupskis.com.

Wade Edward Schaefer, a retired Captain of the Michigan State Police, 77, of Essexville, our honorable, caring, hardworking, and devoted husband, father, grandfather, brother, uncle, and friend was born into eternal life on the morning of Saturday,... View Obituary & Service Information

The family of Capt. Wade E. Schaefer created this Life Tributes page to make it easy to share your memories.

Wade Edward Schaefer, a retired Captain of the Michigan State...

Send flowers to the Schaefer family.