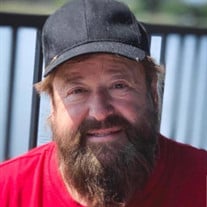 Carl E. Swanbeck II, 64, of Bay City, our caring, loving, and strong-willed soulmate, father, son, brother, uncle, and friend passed away on Friday, July 23, 2021 at McLaren Bay Region surrounded by his family. Carl was born on August 20, 1956. He graduated from Bedford High School in 1974 and went on to attend Central Michigan University, where he received his Bachelor’s Degree in History. While at C.M.U., Carl became very active with the R.O.T.C. He answered the call of our country and proudly served in the U.S. Army for 17 years, where he was a Green Beret. He was a member of the 10th Special Forces Group and served as a ranger and paratrooper on air assault missions. Carl was honorably discharged as a Captain. Carl later earned his Master’s Degree from Saginaw Valley and worked for the Bay City Public Schools as a substitute teacher, along with working part time for the U.S. Census Bureau. In 1990, Carl met Gloria Swiatowy. Their 31 years were blessed with two sons and countless memories. Carl enjoyed time spent with his family, and had a special love for time spent on the water and in the great outdoors. To carry on his legacy, Carl leaves behind his sons, Carl Swanbeck, III and Dalton Swanbeck; soulmate, Gloria Swiatowy; father, Jim Mustafaga; siblings, Dennis, Cheryl (Chris) Clark, Steve Swanbecksister; and many nieces and nephews. Carl was welcomed home to heaven by his mother, Shirley (Brown) Mustafaga and his beloved pets Stryker and Keno. Carl’s family will be present to receive visitors on Saturday, July 31, 2021 from 1:00 PM until Carl’s 6:30 PM Life Celebration & Military Tribute at Skorupski Family Funeral Home & Cremation Services, 821 N. Pine Rd., between Ridge & Center. Cremation will follow. Memorial contributions may be directed to the wishes of the family. Expressions of sympathy may be shared with the family online at www.skorupskis.com.

The family of Carl E. Swanbeck II created this Life Tributes page to make it easy to share your memories.