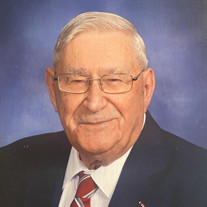 Carl William Frenzke, 96, of Bay City, our loyal, stubborn, and loving grandfather, great-grandfather, uncle, and friend passed away on Sunday, April 18, 2021 with his family by his side at his home. Carl was born on November 24, 1924 in Bay City, the son of the late Henry and Selma (Kebschall) Frenzke. Carl proudly served in the U.S. Army in the 95th infantry as a rifleman during World War II from April 1, 1943 until October 26, 1945. He was proudly awarded the Purple Heart for his service. During the war, Carl was pen pals with Ms. Phyllis Lydia Timm. They dated, fell in love, and were united in marriage on June 1, 1946 at Immanuel Lutheran Church. Together they shared over 53 beautiful years together and countless memories; sadly, she preceded him in death on February 2, 2000. Carl retired from Banker’s Life after over 25 dedicated years. He served as Commander at the AMVets Post 22 and a lifetime member of Immanuel Lutheran where he worked as a treasurer and greeter. Carl enjoyed woodworking, playing cards, hunting with his son, tending to his rose bushes, and was very proud of his German heritage. Above all, Carl loved his family, they were the lights of his life. He will be missed dearly. Carl leaves to cherish his memory, his four loving granddaughters, Kendra (Dave) Delaney, Jessi Delaney, Angela (David) Lund, and Jillian Frenzke; great-grandchildren, Christopher Delaney, Terrence Pringle, Adelynn Lund, and Amelia Frenzke; daughter-in-law, Vickie Frenzke; son-in-law, Harold McKinstry; special family, Judy Bartys, Keith Underwood, Greg Bond, Christine Ross, and Terry Bond, along with his AMVets family. In addition to his wife and parents, Carl was welcomed home to heaven by his children, Charles Frenzke and Diane McKinstry; siblings, Hank Frenzke and Ruth Bond, and son-in-law, Terry Delaney. Carl’s family will be present to receive visitors on Wednesday, April 21, 2021 from 2:30 PM until 8:00 PM with a 7:00 PM White Clover Ceremony at Skorupski Family Funeral Home & Cremation Services, 821 N. Pine Rd., between Ridge & Center. On Thursday, April 22, 2021, Carl will be taken to Immanuel Lutheran Church, 300 N. Sheridan St., where visiting will continue from 10:00 AM until the time of his 11:00 AM Funeral Ceremony. Interment will be held in Floral Gardens Cemetery with a reception to follow at AMVets Post 22. Memorial contributions may be directed to Immanuel Lutheran Church. Expressions of sympathy may be shared with the family online at www.skorupskis.com.

Carl William Frenzke, 96, of Bay City, our loyal, stubborn, and loving grandfather, great-grandfather, uncle, and friend passed away on Sunday, April 18, 2021 with his family by his side at his home. Carl was born on November 24, 1924 in Bay... View Obituary & Service Information

The family of Carl William Frenzke created this Life Tributes page to make it easy to share your memories.

Send flowers to the Frenzke family.