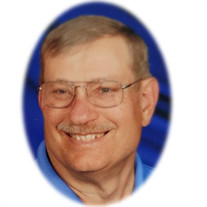 Carl Arthur Marotzke Sr, 67, of Saginaw, our God-loving, outgoing, caring, patient, trustworthy, husband, father, grandfather passed away peacefully at his home with his family by his side on April 12, 2021. Carl was born to the late Ron and Janet (Stinchcombe) Marotzke on January 6, 1954, in Bay City, Michigan. He attended Zion Lutheran School, Bay City, and graduated from Freeland High School. Much later in life, he continued his education at the Automotive Management Institute. While in high school he worked at a local gas station in Auburn, Michigan. In 1973, he took a position as an auto mechanic at Hickey Oldsmobile in Saginaw. He began working at Rick Ford in Hemlock, Michigan, as a body man in the late 70's. In early 1981, Carl decided to open a body shop of his own, Carl’s Auto Body. He retired in 2018 after 37 years of building a very reputable and respected business. Carl enjoyed serving at St. Peter Lutheran Church as an Usher and then later as an elder until he became too sick to serve due to cancer. Playing golf gave him great joy while allowing time to bond with friends both old and new. He also enjoyed playing games, with two of his favorites being cards and cornhole. After retirement, his latest passion was making a multitude of wooded products. His specialty was beautiful crosses and cornhole boards. He enjoyed the labor of yard work and the results that his hard work accomplished upon completion. Family camping trips were special to Carl and a time that he always cherished and looked forward to. Along with starting his own business, Carl’s greatest life accomplishments were raising Carl Jr. and Kelly with an emphasis on religion and good strong core values throughout their entire life. He also enjoyed helping others while sharing his wealth of knowledge with those who would listen. Being a leader in the automotive industry was another passion, uniting people to make the industry a better place. Carl leaves to carry his legacy, his wife of 49 years, Nancy and their children, Carl (Doris) Marotzke Jr. and Kelly (Michael) Kump; grandchildren Sadie Benjamin, Makensey Weathers and a great-grandchild; SJ Hernandez; his step-parents, Sonny Lauria, Sally Marotzke; his siblings, Cheryl Potter, Carol (Robert) Lipp, Ron Marotzke and a number of extended family members and with some lovingly adopted into the family that had a special place in Carl’s heart. Along with his parents, Carl was preceded in death by a grandchild, Wesley Watkins; nephew, Adam Dill and Brother in Law, Chuck Potter. Carl's Family will be present to receive visitors at St. Peter Lutheran Church, 2461 N Raucholz Rd, Hemlock, Michigan on Saturday, April 17, 2021, from 10:00 AM until his Funeral Ceremony at 1:00 PM. Interment to follow at Richland Lutheran Cemetery. Memorial contributions may be directed to St Peter Lutheran Church. Expressions of sympathy may be shared online at www.skorupskis.com

Carl Arthur Marotzke Sr, 67, of Saginaw, our God-loving, outgoing, caring, patient, trustworthy, husband, father, grandfather passed away peacefully at his home with his family by his side on April 12, 2021. Carl was born to the late Ron... View Obituary & Service Information

The family of Carl Arthur Marotzke Sr. created this Life Tributes page to make it easy to share your memories.

Send flowers to the Marotzke family.