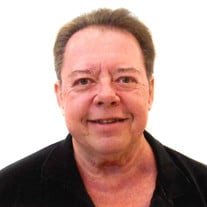 Charles "Chuck" Eugene Fernette II, 77, our charismatic, professional, talented, hellraising, father and cousin, passed away peacefully on March 30, 2021 at the Toni & Trish House. Chuck was born on December 16, 1943, in Muskegan, Michigan to Charles Eugene and Clara Eichhorn (Reichle) Fernette. Chuck attend Frankenmuth High School and went on to study at Delta College and graduated with an Architectural Degree. Chuck was the Head draftsman for the Zilwaukee Bridge project. He retired in 2011 from the City of Tampa as an Architectural Inspector. During his lifetime, he was awarded for Service Above and Beyond from the City of Tampa for his efforts throughout the 2004 Hurricane Season. In his spare time, Chuck enjoyed sports cars and model trains. He was a proud NRA member. Chuck leaves to carry his legacy his son, Mick Fernette; his cousins, Carol Garlo, Randall Fernette and Skip Creed. Chuck was preceded in death by his parents, along with his stepfather, Emmons L. Eichhorn; brother, Charles Eugene Fernette Jr. Private arrangements have been entrusted to Skorupski Family Funeral Home & Cremation Services, 1550 Midland Road, Saginaw, Michigan. Memorial contributions may be directed to The Toni & Trish House, 4699 11 Mile Rd., Auburn, MI 48611. Expressions of sympathy may be shared with the family online at www.skorupskis.com.

The family of Charles Eugene Fernette II created this Life Tributes page to make it easy to share your memories.

Send flowers to the Fernette family.