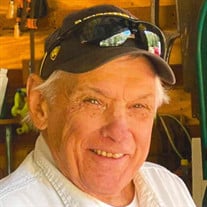 Chester James Urbaniak, 84, of Bay City, our loveable and hard-working father, grandfather, brother, uncle, and friend was born into eternal life on the morning of Tuesday, November 24, 2020 at McLaren Bay Region. Chester was born in Bay City on December 26, 1935, the son of the late Chester Thomas and Agnes (Przybylski) Urbaniak. He graduated from Bay City Central with the Class of 1953 and went on to proudly serve in the U.S. Air Force, and later the U.S. Air Force Reserves, prior to being honorably discharged on February 1, 1963. He then attended Tri-State University in Angola, Indiana, obtaining his B.S. degree in Civil Engineering. Chet worked in the sheet metal and ductwork industry, specializing in estimating, fabrication, and installation. He was a true “Jack of All Trades” and enjoyed staying busy and on the go, which naturally made him a master at his craft. Chet was proud of his design and construction of the 50 foot tall cross in Frankenmuth’s Cross Park with his company, Saginaw Engineering. In his free time, Chet enjoyed golfing, University of Michigan Football, bowling, classic cars, trucks, and tractors, and dabbling in carpentry. When asked what he wanted for Christmas each year, Chet always had one wish, “Five Good Kids.” Thankfully, he received his wish each and every year; his five children and their families were truly the lights of Chet’s life. Chester was also a bowling enthusiast and was most proud of his 299 game, only to beat that the following week with his 300 game. He was a faithful parishioner of St. Frances de Sales Parish (St. Christopher Church) in Bridgeport and will be deeply missed. He leaves to carry on his legacy, his five wonderful children, Clair James (Sandra Kay) Urbaniak, Chester Thomas (Julie) Urbaniak, Cara Jo Urbaniak (Jason Freeman), Daniel Jason (Crystal) Urbaniak, and Jennifer Rose (Patrick) Wilson; grandchildren, Cole James Urbaniak, Clay Thomas Urbaniak, Corey Brandon Atwell, Dakota James McLaughlin, Abigail Rose Urbaniak, Ciera Lynn (Michael) Hart, Alexis Rae Wilson, and Julia Rose Shemanski; great-grandchildren, Noah Roman Atwell and Elise Ann Lynn Hart; sister, Edna Munger, along with many nieces, nephews, and friends. In addition to his parents, Chester was preceded in death by his three sisters, Mary Ann (Robert) Kolb, Genevieve (Jack) Frimberger, and Rose Marie Heritier. The Rite of Committal with Military Honors will be held privately at Mt. Olivet Cemetery’s Mausoleum, 3440 S. Washington Rd., Saginaw. Memorial contributions may be directed to the Wounded Warriors, St. Jude Children’s Research Hospital, or St. Frances de Sales Parish. Expressions of sympathy may be shared with the family online at www.skorupskis.com.

The family of Chester James "Chet" Jim" Urbaniak created this Life Tributes page to make it easy to share your memories.

Chester James Urbaniak, 84, of Bay City, our loveable and hard-working...

Send flowers to the Urbaniak family.