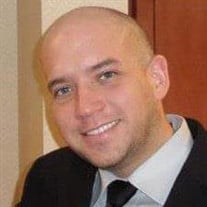 Christopher Lynn Scheall, 41, of Bay City, our caring and kind nephew, cousin, and friend passed unexpectedly on Thursday, June 24, 2021. Chris was born in Bay City on December 29, 1979, the son of the late Ronnie and Linda (Ortega) Scheall. He was a graduate of Western High School and received his Associate Degree from Delta College. Chris went on to earn his Bachelor Degree from Michigan State University, and remained a lifelong Spartan fan. Chris was a talented designer, working in the online design and development field. Chris enjoyed his pride and joy, "Vanessa," his 2017 Dodge Charger. Chris was a caring and loving son and brother. Following the death of his brother, Nicholas Scheall in 2016, he moved from Chicago back to the family home in Bay City. While working from home, he was able to help care for his ailing father, Ronnie I. Scheall, who passed in 2018. After the death of his father, Chris was his mother's strength and caregiver from the day she was diagnosed with cancer until her last day in 2020. Chris was also predeceased by his grandparents, Eustacio and Jill Ortega, and Leon and Sylvia Scheall. He is survived by his aunt and uncle, Susan (Ortega) and Mike Passariello; aunt, Hope (Ortega) Van Tiem; uncle, Stevan Ortega; aunt, Phyliss Scheall, and also his many friends, whom he appreciated and cherished. Private cremation arrangements have been entrusted to Skorupski Family Funeral Home & Cremation Services, 821 N. Pine Rd., between Ridge & Center. Memorial contributions in memory of Chris may be directed to the Nicholas S. Scheall Memorial Scholarship at S.V.S.U., the Linda Scheall Memorial Scholarship Endowment at Delta College, The ALS Association, or a charity of the donor's choice. Expressions of sympathy may be shared with the family online at www.skorupskis.com.

Christopher Lynn Scheall, 41, of Bay City, our caring and kind nephew, cousin, and friend passed unexpectedly on Thursday, June 24, 2021. Chris was born in Bay City on December 29, 1979, the son of the late Ronnie and Linda (Ortega) Scheall. He... View Obituary & Service Information

The family of Christopher Lynn Scheall created this Life Tributes page to make it easy to share your memories.

Christopher Lynn Scheall, 41, of Bay City, our caring and kind...

Send flowers to the Scheall family.