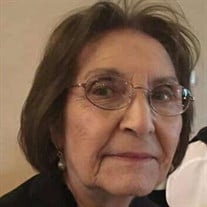 Clara Elizabeth (Fisher) Jackson, 90, of Bay City, our loving, thoughtful, helpful, and inspiring mother, grandma, Mima, Grammy, sister, and friend, was born into eternal life on the morning of Tuesday, February 1, 2022 at her home with her family by her side. Clara was born in Isabella County on November 8, 1931, the daughter of Edmund and Odeal (Rescoe) Fisher. Clara graduated from St. Joseph High School in 1951. She married the love of her life, Paul Francis Jackson, on February 15, 1957 in Holy Trinity Church. Clara was a Noon-Aid for Bay City Public Schools for many years. Clara was a huge fan of all things University of Michigan (GO BLUE!). She enjoyed playing softball with her sisters, going to her class reunions, dancing at P.W.S.D, going to the casinos, and playing bingo. However, nothing was more important than her family and spending time with her beloved grandchildren and great-grandchildren. Clara was a long-time parishioner of St. George Byzantine Church. Clara was extremely proud of her Chippewa Heritage and was a proud member of the Saginaw Chippewa Indian Tribe. Clara was proud to finally have made it to the “Big House” for her 85th birthday. Left to cherish her loving memory are her eight children, Richard and wife, Beth Jackson, Jay Jackson, George Jackson, Dale and wife, Linda Jackson, Mary and husband, Rick Bouckaert, Gene Jackson, Dennis Jackson, and Paul (Jody Bouchard) Jackson; grandchildren, Candi (Dan) Miller, Holly Jackson, Kristina Bouckaert, Bryan Bouckaert, Nykole Jackson, and Cris Jackson; great-grandchildren, Danielle Miller, Kendall and Marshall Prest; sister, Rosalie Berry and sister-in-law, Michelle Fisher, and many nieces and nephews. In addition to her parents, Clara was welcomed home to heaven by her beloved husband, Paul Jackson; brothers, Robert, Harold, Edmund Jr., Louis, and Peter Fisher; and sisters, Alberta, Helen, and Roberta Fisher, and Barbara Meier, and two infant siblings; father-in-law and mother-in-law, Walter and Dorothy Jackson; and brother-in-law, James Jackson. Clara’s family will be present to receive visitors on Sunday, February 6, 2022 at 12:00 Noon until 6:00 PM, with a 4:00 PM Saginaw Chippewa Tribal Memorial lead by Miizhabwad – Eric Sowmick and on Monday, February 7, 2022 from 10:00 AM until Clara’s 11:00 AM Funeral Ceremony Fr. Jim Batcha will preside at Skorupski Family Funeral Home & Cremation Services, 821 N. Pine Rd., between Ridge & Center. With the Rite of Committal to follow in St. Patrick Cemetery. Friends and family are invited to wear their Maize and Blue University of Michigan attire for the visiting on Sunday. Memorial contributions may be directed to the Humane Society of Bay County. Expressions of sympathy may be shared with the family online at www.skorupskis.com.

Clara Elizabeth (Fisher) Jackson, 90, of Bay City, our loving, thoughtful, helpful, and inspiring mother, grandma, Mima, Grammy, sister, and friend, was born into eternal life on the morning of Tuesday, February 1, 2022 at her home with her... View Obituary & Service Information

The family of Clara Elizabeth Jackson created this Life Tributes page to make it easy to share your memories.

Send flowers to the Jackson family.