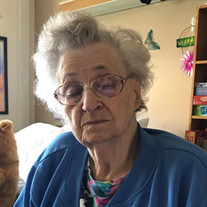 Clarissa Jean Capp, 96, of Bay City, our feisty and strong-willed mother, grandmother, sister, aunt, and friend passed away peacefully on Monday, August 30, 2021 at Bay County Medical Care Facility. Clarissa was born in Standish on November 18, 1924, the daughter of the late Grant and Hazel (Hastings) Carruthers. As a young lady, she happened to meet a neighborhood boy by the name of John Capp. They dated, fell in love, and were united in marriage on May 22, 1948. Their marriage was blessed with four children, 48 years, and countless memories. John preceded Clarissa in death in November of 1996. Answering the call of our country, Clarissa proudly and honorably served in the U.S. Army during World War II and was a member of the V.F.W. She later went on to work at K-Mart in the Men’s Department. A true servant of the Lord, Clarissa was a faithful member of Trinity Episcopal Church in Bay City. She enjoyed baking bread and gardening, especially tending to her rose bushes. A resident of Bay Medical Care Facility for many years, Clarissa took her job of tending to the flowers very seriously and was affectionately known as “The Flower Lady.” Her loving ways will live on in the hearts of her family and friends for generations to come. To carry on her legacy, Clarissa leaves her four children: Clarissa “Sue” (Tom) Suchodolski, John Capp, Faith (Rob) Culler, and Amy Capp (Brian Eyre); grandchildren, Abby (Craig) Leinbach, Amanda (Jerry) Carmien, Ashley Suchodolski (Eric Bridenbaugh), Molly (Clarence) Pearson, Jonathon Capp, Melissa Capp (Jack), Holly Culler, Matthew Culler (Briana Rohde), Adam Culler (fiancée, Lauren Shuler), Benjamin Capp, Jordan Capp-Gallandt, and Morgan Capp-Gallandt; numerous great-grandchildren; sister, Dorothy Kline, along with many nieces and nephews. In addition to her parents and husband, Clarissa was preceded in death by her siblings, Noel (Al) Hart, Hope Carruthers, Jess Carruthers, Ray (Hilde) Carruthers, and brother-in-law, Elwin Klinem, twin great-grandchildren; Ryan and Nadia Leinbach. Clarissa’s family will be present to receive visitors on Tuesday, September 7, 2021 from 10:00 AM until Clarissa’s 11:00 AM Memorial Ceremony at Skorupski Family Funeral Home & Cremation Services, 821 N. Pine Rd., between Ridge & Center. The Reverend Sue Rich will officiate with inurnment to be held privately in Floral Gardens Cemetery. Memorial contributions may be directed to the wishes of the family. Expressions of sympathy may be shared with the family online at www.skorupskis.com.

The family of Clarissa Jean Capp created this Life Tributes page to make it easy to share your memories.

Clarissa Jean Capp, 96, of Bay City, our feisty and strong-willed...

Send flowers to the Capp family.