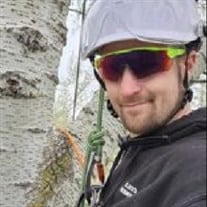 Cole Richard Zielinski, 29, of Bay City, Michigan, our fun, loving, hardworking, and kind son, father, fiance, brother, uncle, and friend passed away Sunday, May 30, 2021 during a boat ride on the Saginaw Bay. Cole was born on January 29, 1992 in Bay City. He always had a love for his dogs, but none that compared to love for his daughter, Layliha May Zielinski. He was a strong man that overcame many obstacles and never gave up. He started tree work with his father, Richard Zielinski, and grew up knowing that was his passion. Cole enjoyed hunting, fishing, and boating. He was very kind and would give to anyone that he could, even when he had little to spare. Cole always loved and believed in God, and has now gone home to join his father, Rick, and grandfather, Harry Zielinski, who were lost just shy of seven years ago. He had a zest for life and loved hard. He will be greatly missed not only by his daughter and unborn son, but also his nieces, nephews, and entire family. Cole's memory will be cherished for years to come. Cole leaves to cherish his memory his fiance, Mackenzie Rant; unborn son, Colesen; daughter, Layliha Zielinski; grandmother, Ann LaRue; mother, Jody Zielinski; brother, Joseph (Kayla) Zielinski; and sisters, Lashei Zielinski and Courtney (Bill) Philopulos; nieces and nephews, Carson and Haydin French, Lorae Lautner, Addison Zielinski, Wyatt and Penelope Philopulos, Annabelle VanParis and Austin Kostus; along with many friends and extended family members. Cole was welcomed home to heaven by his father, Richard Zielinski (October of 2014) and his grandfather, Harry Zielinski (2014). Cole's memorial ceremony will be held privately. Final arrangements have been entrusted to Skorupski Family Funeral Home & Cremation Services, 821 N. Pine Rd., between Ridge & Center. The family would like to extend a heartfelt thank you, with the utmost gratitude to Lt. Ryan Lothian and Matthew Hewitt for the amazing support and guidance throughout Cole's life. Memorial contributions may be directed to Cole's favorite charity, St. Jude Children's Hospital. Expressions of sympathy may be shared with the family online at www.skorupskis.com.

The family of Cole Richard Zielinski created this Life Tributes page to make it easy to share your memories.

Send flowers to the Zielinski family.