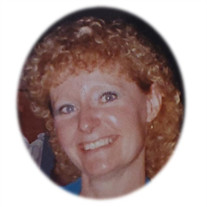 Cynthia “Cyndi” Wilma Carmichael (Badour), 72, of Auburn, our free-spirited, generous, and caring mother and grandmother was called to - as she so frequently liked to say - “join the Spirit in the Sky” on the morning of Saturday, January 29, 2022. Cynthia was born in Bay City on August 13, 1949, the daughter of the late Donald Badour and Dorothy (Vermeesch) Daniels. Cyndi met the love of her life, Richard “Dick” James Carmichael, in 1972 and were united in marriage on November 1, 1986. They celebrated and enjoyed life together for 50 years. Sadly, he preceded her in passing on November 12, 2016. Cyndi wore many hats in her lifetime: mom, grandma, seamstress, bartender, ceramics teacher, cashier, and renowned rabbit guru. She was very creative, helping design and sew costumes and create set designs, and volunteered at several theater productions. Cyndi had a big heart and was always one to help those who were in need. She raised and showed rabbits for many years and enjoyed being part of the American Rabbit Breeders Association. Left to miss her, Cyndi leaves her children, Kara (Joe) Switala of Auburn and Tina (Alan) Stepanek of Warner Robins, Georgia; grandchildren, Tyler (Katherine) Stepanek of Atlanta, Georgia, Ashley Stepanek of Louisville, Kentucky, Brooke Stepanek of Warner Robins, Georgia, and Jett and Melanie Switala of Auburn, Michigan, along with many nieces and nephews and special family friend, Michael Hidalgo. Along with her husband and parents, Cynthia was welcomed to heaven by her brother, Timothy Badour. Cyndi’s family will be present to receive visitors on Tuesday, February 1, 2022, from 3:00pm until 6:30pm, with a Funeral Ceremony at 6:30pm at Skorupski Family Funeral Home & Cremation Services, 821 N. Pine Rd., Essexville, Michigan, between Center and Ridge. Memorial contributions may be directed to wishes of the family. Expressions of sympathy may be shared with the family online at www.skorupskis.com

The family of Cynthia "Cyndi" Wilma (Badour) Carmichael created this Life Tributes page to make it easy to share your memories.