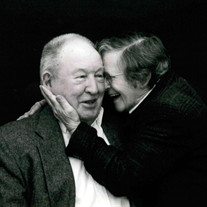 Dale Eugene Erskine, 89, our hardworking and honest, husband, father, grandfather, and great-grandfather, passed away peacefully at his home with his family by his side. Dale was born on December 22, 1932, to the late R. Eugene and Hattie (Schwartz) Erskine in Hemlock. Dale graduated from Hemlock High School. He married his high school sweetheart, the former Joan Burr on May 5, 1954. Together, they enjoyed over 67 years of marriage. Dale proudly served his country in the Army, and after his tour, he returned home to the family farm. Dale was a farmer from the time he could milk a cow. When he wasn’t working the farm he enjoyed camping, elk viewing with friends, deer hunting and attending family sporting events. Dale will be deeply missed by his loving wife, Joan; their children, Dave (Jane) Erskine, Kathy (Gary) Lyvere, Linda LaLonde, and Julie (Kevin) Hughes; grandchildren, Ann, Sarah (Steven), Chris, Therese, Kelly (Kyle), Angela (Jassen), Nicole, Bob, Aaron (Heather), Jon (Sam), Nicole, and Kenny; 20 great- grandchildren, with one on the way; sisters-in-law, Shirley Erskine, Jane Burr, Marge Burr, and Connie (Tim) Zissler, and many nieces and nephews. Along with his parents, Dale was preceded in death by his brother, Glenn; sisters-in-law; Dorothy Erskine, and Evelyn (Hersch) Todd, and brothers-in-law, Jake Burr, Tom Burr, Bob Burr and Gerald Erskine. Dale’s family will be present to receive visitors on Tuesday, February 1, 2022, at Nelson United Methodist Church, 5950 S Hemlock Rd, Hemlock from Noon until Dale’s 1:00 pm Memorial Ceremony. Inurnment will be at Fremont Township Cemetery. Final arrangements have been entrusted to Skorupski Family Funeral Home & Cremation Services, 1550 Midland Rd., between State & Gratiot. Memorial contributions may be directed to Nelson United Methodist Church or a charity of the donor’s choice. Expressions of sympathy may be shared with the family online at www.skorupskis.com.

Dale Eugene Erskine, 89, our hardworking and honest, husband, father, grandfather, and great-grandfather, passed away peacefully at his home with his family by his side. Dale was born on December 22, 1932, to the late R. Eugene and Hattie (Schwartz)... View Obituary & Service Information

The family of Dale Eugene Erskine created this Life Tributes page to make it easy to share your memories.

Send flowers to the Erskine family.