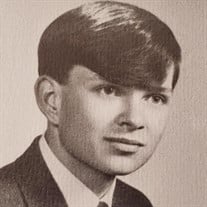 Daniel P. Gillman, 72, of Bay City, our helpful and hardworking husband, father, grandpa, brother, uncle, and friend passed away on Saturday, August 8, 2020 at McLaren Bay Region. Daniel was born in Midland on March 23, 1948, the son of the late Dale Gillman and Florence (Birch) Pitre. He graduated from John Glenn High School with the first graduating class in 1967. While at McDonald's in his Corvette, Daniel happened to meet the former Dolores Przybyszewski. They dated, fell in love, and were united in marriage on July 14, 1972. Daniel was employed with General Motors - Saginaw Steering Gear, where he retired from in 1998 after over 30 years of dedicated service. Daniel liked to work on cars, building engines, and doing all of his own repairs. He also liked to do electrical work, wiring many houses for friends and family. Daniel was very handy with many things - from carpentry, welding, to repairing electronics. He was always willing to help others as needed with his abilities. Daniel also had a love for dogs and was very attached to his two dogs, Frisker and Shadow. He enjoyed driving around Michigan, taking in all the sights, and visiting different restaurants. Daniel also liked to go with his wife, Dolores, to the casino, especially Saganing Eagle in Standish. Daniel was most happy spending time with his wife, talking with friends and family, and sharing stories from his past experiences. Daniel is survived by his faithful wife of 48 years, Dolores, and their son, Jarrod & Theresa Gillman; grandson, Daniel Gillman; brother, Richard Gillman; in-laws, Donald & Denise Przybyszewski, Rosemary Przybyszewski, Dorothy Przybyszewski Kopka; close friends, Marion & Carol Klosowski, Paul & Janice Parker, and Raymond Lore, along with many nieces and nephews. In addition to his parents, Daniel was preceded in death by his step-father, Edward Pitre; step-brother, Gerald "Bub" Pitre; step-sister, Charlene Aaron, and his best friend, Donald "Buzz" Bell. Due to Daniel's wishes, no formal ceremony will be held. His ashes will be scattered among his favorite locations. Private arrangements have been entrusted to Skorupski Family Funeral Home & Cremation Services, 821 N. Pine Rd., between Ridge & Center. In lieu of flowers, memorial contributions may be directed to the Humane Society of Bay County. Expressions of sympathy may be shared with the family online at www.skorupskis.com.

Daniel P. Gillman, 72, of Bay City, our helpful and hardworking husband, father, grandpa, brother, uncle, and friend passed away on Saturday, August 8, 2020 at McLaren Bay Region. Daniel was born in Midland on March 23, 1948, the son of the... View Obituary & Service Information

The family of Daniel P. Gillman created this Life Tributes page to make it easy to share your memories.

Daniel P. Gillman, 72, of Bay City, our helpful and hardworking...

Send flowers to the Gillman family.