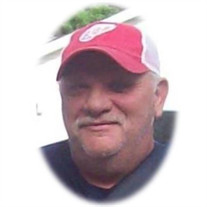 Dennis Lee Tobin, 69, of Prescott, Michigan, our kind, loving and prankster of a husband, father, grandfather, and great-grandfather, passed away peacefully on January 27, 2021 with his family at his side. Dennis was born on April 11, 1951 in Detroit, Michigan to Wilbert and Dolores (Warner) Tobin. Dennis was affectionately known by his family and friends as “Pork Chop”. Dennis attended John F. Kennedy High School in Taylor, Michigan. He met the former Judy Cavil, through his younger brother at Farrell’s Ice Cream Parlor. Dennis bought her a banana split and they have been enjoying the sweet life ever since 1980 when they were married. Dennis worked for General Motors as a Hi Lo Operator for over 20 years. Spending time with his family and grandkids were the highlight of his life. In his spare time, Dennis enjoyed hunting, guns, wood making projects and playing cards. Dennis leaved to carry his legacy his loving wife, Judy; children, Audrey (Paul) Tykoski, Shari (Chad) Cannon, Kimberly (Jonathan) Greig and Dennis (Brooke) Tobin Jr. His was the loving Pappa to Katelynn, Justin (Kelsey), Tyler, Melanie, Logan, Makayla, Zachary, Brandon and Cody; great grandfather of Jacob, Issac and Owen. He also leaves his mother, Dolores. Dennis was welcomed home by his father and his sister, Joann. Private arrangements have been entrusted to Skorupski Family Funeral Home & Cremation Services (formerly Reitz-Herzberg), 1550 Midland Rd., between State & Gratiot. Memorial contributions may be directed to wishes of the family. Expressions of sympathy may be shared with the family online at www.skorupskis.com.

Dennis Lee Tobin, 69, of Prescott, Michigan, our kind, loving and prankster of a husband, father, grandfather, and great-grandfather, passed away peacefully on January 27, 2021 with his family at his side. Dennis was born on April 11, 1951... View Obituary & Service Information

The family of Dennis Lee Tobin created this Life Tributes page to make it easy to share your memories.

Send flowers to the Tobin family.