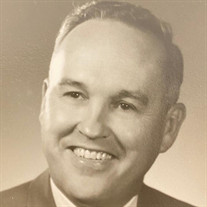 Donald Joseph Johnson, 102, of Hampton Twp., our kind and generous Father, Gramps, and Great Gramps was born on May 18, 1918 in Hampton Twp. during the Spanish Flu and was born into eternal life on the evening of Saturday, August 29, 2020 during the COVID-19 pandemic. Donald was the son of the late Joseph A. and Vera (Barbara) Johnson. He was a graduate of St. John’s High School, Class of 1936, and went on to attend Northeastern School of Commerce, graduating in 1938. In 1942, Don enlisted with the U.S. Army and proudly served during World War II, participating in the Battle of the Bulge. Don was honorably discharged as a Master Sergeant on October 10, 1945 in Camp Polk, Louisiana, where he was awarded the Croix de Guerre (with palm) by the Belgian Government. While at a party, Don met the former Mabel Hamlin. They dated, fell in love, and were united in marriage on March 17, 1943 in Atlanta, Georgia. After 55 years of marriage, Mabel preceded Don in death on March 20, 1998. Don was employed by the U.S. Government as an Internal Revenue Agent for 30 years from 1946-1975. Following retirement, Don worked as a Tax Consultant for Weinlander Fitzhugh Bertuleit & Schairer from 1975-1995. He was a former member of St. Joseph Parish, and a lifetime member of the V.F.W. and Veterans of the Battle of the Bulge. Those who knew Don will forever remember his thorough and particular ways. He loved talking financials, reading the Meijer weekly ads, and was proud of being a “Frugal Dutchman.” Don’s advice to living past age 100 was to “consider a regular regimen of Ground Flaxseed.” Don loved gardening, and was an accomplished Master Gardener. His love for his family will live on for generations to come. Don leaves to carry on his legacy, his son, Gary (Lynn) Johnson; grandson, Brennan (JoJo) Johnson; two great-grandsons, Connor and Noah Johnson; nieces, Janie (Steve) Hansen, Mary Wetmore, and Suzanne (Tom) Monaghan; nephews, Rob (Lois) Lockerman, James Johnson, Jr., Kevin Johnson, John (Peggy) Gilbert, John (Joy) O’Brien, and special friends, Ruth Ann “Sis” Krzewinski and Robert Duyck. In addition to his parents and his wife, Don was preceded in death by his siblings, Muriel (Robert) Lockerman and James (Jeannie) Johnson; nephew, Michael Gilbert, and nephew-in-law, Larry Wetmore. Don’s family will be present to receive visitors on Friday, September 4, 2020 from 4:00 PM until Don’s 5:00 PM Life Celebration outdoors at Skorupski Family Funeral Home & Cremation Services, 821 N. Pine Rd., between Ridge & Center. Please click the following link to view the ceremony live https://client.tribucast.com/tcid/69674753. Fr. John “Jack” Johnson will officiate. A Life Celebration Reception will continue outdoors until 8:00 PM. The Rite of Committal will be held privately at St. Patrick’s Mausoleum. Memorial contributions may be directed to the Parkinson’s Foundation. Expressions of sympathy may be shared with the family online at www.skorupskis.com.

Donald Joseph Johnson, 102, of Hampton Twp., our kind and generous Father, Gramps, and Great Gramps was born on May 18, 1918 in Hampton Twp. during the Spanish Flu and was born into eternal life on the evening of Saturday, August 29, 2020 during... View Obituary & Service Information

The family of Donald Joseph Johnson created this Life Tributes page to make it easy to share your memories.

Donald Joseph Johnson, 102, of Hampton Twp., our kind and generous...

Send flowers to the Johnson family.