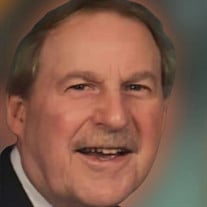 Donald Stewart LaForge, 86, our kind, wonderful, gentle, encouraging and loving husband, father, grandfather, great-grandfather, brother and devoted friend was born into eternal life on February 28, 2022 at McLaren Bay Region. Don was born on March 12, 1935, to the late Leo and Adelaide (French) LaForge in Bay City. He was the youngest of six and always kept busy. He enjoyed spending time outdoors with his friends. Don graduated from St. Joseph High School in 1954. Upon graduation, Don courageously joined the United States Army. He was stationed in Germany as a surveyor. While in the Army, he received a Good Conduct Medal and two Marksman Badges. After returning home and being discharged from the military, Don received his Business Degree from Bay City Junior College. Don spent many years as an Insurance Salesman, mostly employed by Metropolitan Life, and later retired from Western Southern Life Insurance Company. Don met the beautiful Nancy Schneider while with a group of friends. They were united in marriage on March 21, 1987 at an intimate ceremony at Nancy’s mother’s home. It was then blessed at St. John’s Church. Don and Nancy were blessed with 35 years together and countless memories. Don loved to travel. Some of his favorite trips were to the Nashville and Gatlinburg, Tennessee areas and Branson, Missouri. He loved talking about his 85th Birthday Celebration at Brooklyn Boyz Pizzeria and being surrounded by family, right before the world shut down in 2020. Don volunteered much of his time for Habitat for Humanity. Don was an avid walker. He would say, “walking is the superior exercise.” Don’s legacy will continue to live on in his beloved wife of 35 years, Nancy LaForge; children, Suzanne (Ruben) Claerhout, David (Nikki) LaForge, Mark LaForge, Kathryn (Ann Mulligan) Boyce, and Lisa (Gary) Gallup; grandchildren, Ryan and Michael Claerhout, Heather Gallup and Samantha LaForge; great-grandchildren, Arwyn, Skyler, Victoria, Serenity, Christopher Jr., Robert and Isla; sisters-in-law, Christine (Ed) Richardson, Patricia (Mike) Griswold, Barbara (David) Grove, and Mary Moore, and brother-in-law, Richard Schneider. Don was welcomed home by his parents, Leo and Adelaide LaForge; son, Scott LaForge; grandson, Christopher Gallup; and siblings, Ruth, Nora, Adeline, Roy, and Leo. Private arrangements have been entrusted to Skorupski Family Funeral Home & Cremation Services, 821 N. Pine Rd., between Ridge & Center. A Celebration of Life Ceremony will be held at a later date. Memorial contributions may be directed to the wishes of the family. Expressions of sympathy may be shared with the family online at www.skorupskis.com.

The family of Donald Stewart LaForge created this Life Tributes page to make it easy to share your memories.

Send flowers to the LaForge family.