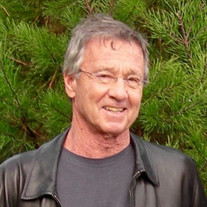 The Ceremony for Dr. Dennis Moore Tibble may be viewed live at 1:00 PM EST on Saturday, April 17, 2021 by clicking the following link: https://client.tribucast.com/tcid/74638211 Dr. Dennis Moore Tibble, 84, of Bay City, our caring, hardworking, intelligent, and most adventurous husband, father, and grandfather passed away on Friday, March 5, 2021 at his residence, under the loving care of his family. Dennis was born in Pontiac, Michigan on September 19, 1936, the son of the late Dennis Joseph and Juliette Emma (Moore) Tibble. Dennis proudly served in the U.S. Navy as a Corpsman during the Korean War, after which he completed his undergraduate studies at Albion College, where he majored in pre-med. Dennis continued his studies at the University of Michigan, receiving his Medical Doctor degree in June 1964, graduating Cum Laude. After settling in Saginaw, he ultimately founded Great Lakes Eye, where he led a thriving practice until his retirement in 1996. Dennis was a well-respected ophthalmologist and ophthalmic surgeon throughout his career, inspiring many with his generosity and his passion for work. It was at Albion College, where Dennis met the love of his life, the former Joanne Gilbert. Dennis and Joanne dated, fell in love, and were married on June 16, 1964. After settling in Saginaw, Dennis and Joanne raised three children -- Martin “Marty” Tibble, Cindy Tibble, and Jay Tibble -- and together as a couple and as a family they traveled the world: helicopter skiing in the Canadian Rockies; sailing in the Virgin Islands; and scuba diving in the South Pacific. Dennis was an adventurer and threw himself into many pursuits. He was an expert scuba diver, windsurfer, biker, snowboarder, and devout skier. He was always up for new experiences and passed along that spirit of adventure to his children and grandchildren. Dennis leaves his wife and children to carry on his legacy, as well as Marty’s wife Heather Tibble; grandchildren, Morgan and Lauren Tibble and Fae and Lowa Bossung; brother, RJ (Carla) Tibble; sister, Andrea (Jim) Murdock; in-laws, Kathy Gilbert and Jim Halliday, along with many nieces, nephews, and friends. In addition to his parents, he was preceded in death by his son-in-law, Seth Bossung and sister-in-law, Sue Halliday. A Life Celebration will be held from 2:00 PM until 4:00 PM on Saturday, April 17, 2021 at Skorupski Family Funeral Home & Cremation Services, 821 N. Pine Rd., between Ridge & Center. In lieu of flowers, memorial contributions may be directed to YWCA Great Lakes Bay Region, 1104 Washington Ave., Bay City, MI 48708. Expressions of sympathy may be shared with the family online at www.skorupskis.com.

The family of Dr. Dennis Moore Tibble created this Life Tributes page to make it easy to share your memories.

The Ceremony for Dr. Dennis Moore Tibble may be viewed live at...

Send flowers to the Tibble family.