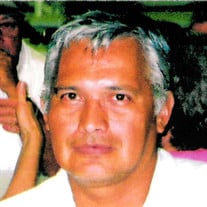 Edward Ortega, 69, of Saginaw, our kind, free-spirited, and most loving husband, father, grandfather, great-grandfather, brother, uncle, cousin and loyal friend was born into eternal life on the morning of Friday, April 8, 2022 at his home surrounded by his family. Edward was born in Saginaw on July 29, 1952 to the late Antonio and Josephine (Castonan) Ortega. He graduated from Saginaw High in 1971. While in school, he met the beautiful Rosalva Garibay. The high school sweethearts dated, fell in love and were united in marriage on June 10, 1974 at the Saginaw County Court House. Together, they shared over 50 years and countless memories. Edward loved meeting new people, and never had a bad thing to say about anyone. He was a man of few words, but always had wonderful thoughts. Edward had a big heart and loved everyone, especially children. He was a family man through and through. Edward was a devout Catholic and a faithful parishioner of Christ the Good Shepherd Parish. He loved his church family. Edward enjoyed going for walks, camping and being outside. Nothing was more important to him than his family. To carry on his legacy, Edward leaves his wife of 47 years, Rose; his daughter, Catherine (Ricky) Tyson; his grandchildren, Shawn Drake, Felicia Tyson, Rickie Alvarado, and Paige Tyson, and eleven great-grandchildren, who were the lights of his life. Edward also leaves his sister, Margaret Salazar; his brothers, Daniel (Silvia) Ortega, Michael (Maria) Ortega, and Fred Ortega; his sisters-in-law, Sylvia (David) Hernandez, Liz (David) Sawyer, and Benita Ortega; his brother-in-law, Raymond (Bernadette) Garibay, and many nieces, nephews, cousins and friends. In addition to his parents, Edward was welcomed home to Heaven by his brother, Robert Ortega. Edward's family will be present to receive visitors on Wednesday, April 13, 2022 from 3:00 PM until his 5:00 PM Memorial Ceremony at Skorupski Family Funeral Home & Cremation Services, 1550 Midland Rd., between State and Gratiot. Fr. Baltha Raj Bandaru will preside. Memorial contributions may be directed to the wishes of the family. Expressions of sympathy may be shared at www.skorupskis.com.

Edward Ortega, 69, of Saginaw, our kind, free-spirited, and most loving husband, father, grandfather, great-grandfather, brother, uncle, cousin and loyal friend was born into eternal life on the morning of Friday, April 8, 2022 at his home surrounded... View Obituary & Service Information

The family of Edward Ortega created this Life Tributes page to make it easy to share your memories.

Edward Ortega, 69, of Saginaw, our kind, free-spirited, and most...

Send flowers to the Ortega family.