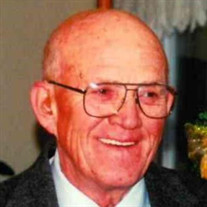 Edward Claude Perkins, 92, of Bridgeport, our loving husband, father and grandfather, was born into eternal life on December 3, 2020. Edward was born in Saginaw on October 8, 1928, the son of the late Terrance Claude and Elizabeth (Lokinski) Perkins. He attended Saginaw High School and later went on to join the U.S. Army and served in the Korean War with the 329th  Transportation Heavy Boat Company.  He met the former Joyce Brettrager while lifting weights with her father. They dated, fell in love, and were united in marriage on February 6, 1954. After the military, he went on to work for Spence Brothers. General Construction, retiring after 38 years.  Edward was known for his love of construction, hunting, and fishing.  Ed was an all-around good guy, who would give a helping hand to anyone in need. He found great pleasure in plowing people’s driveways and doing what he could to help others.  Ed was a meticulous woodworker.  He was an avid cat lover and enjoyed feeding the wild birds in his yard. Edward is survived by and will be deeply missed by his wife, Joyce, and his children, Pam, Douglas and Larry, along with his beloved grandchildren; Matt and Marcin. Edward was preceded by his parents and his sisters, Billie, Lillian and Esther. Private arrangements have been entrusted to Skorupski Family Funeral Home & Cremation Services (formerly Reitz-Herzberg), 1550 Midland Rd., between State & Gratiot. Memorial contributions may be directed to the Humane Society of Saginaw County, Inc. Expressions of sympathy may be shared with the family online at www.skorupskis.com.

Edward Claude Perkins, 92, of Bridgeport, our loving husband, father and grandfather, was born into eternal life on December 3, 2020. Edward was born in Saginaw on October 8, 1928, the son of the late Terrance Claude and Elizabeth (Lokinski)... View Obituary & Service Information

The family of Edward Claude Perkins created this Life Tributes page to make it easy to share your memories.

Send flowers to the Perkins family.