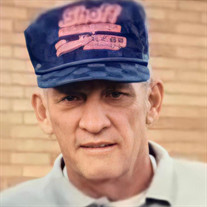 Edward Quin Scott, Jr., 85, of Lansing, our hardworking, humble, and devoted father, grandfather, brother, uncle, and loyal friend was born into eternal life on the morning of Thursday, July 1, 2021 at The Willows in Okemos. Ed was born in Lansing on March 23, 1936, the son of the late Edward Quin Scott, Sr., and the former Katie Pauline Gladstone. While out roller skating, he happened to meet a beautiful young lady by the name of Peggy Ann Hunt. They dated, fell in love, and were united in marriage on September 18, 1955. Their marriage was blessed with 63 years, four boys, and countless memories. On July 24, 2019, Peggy preceded Ed in death. Ed was a proud U.S. Marine Veteran and retired from Frigidaire after many years of service. In his free time, he enjoyed auto racing, especially NASCAR and sprint car races, and enjoyed the great outdoors hunting, camping, and golfing. Always dedicated to his family, Ed will forever be remembered for his friendly and sociable ways. Never one to judge, Ed accepted all for who they were. He will be deeply missed, yet lovingly remembered for generations to come. To carry on his legacy, Ed leaves behind his three sons, Doug, Mike, and Patrick Scott; ten grandchildren and their families; siblings, Duane (Deb) Scott, L.J. (Robin) Scott, and Darlene (Michael) Johnson, along with many nieces and nephews. In addition to his parents and his beloved Peggy, Ed was welcomed home to heaven by his son, Jeffrey Scott; brother, James Whidden, and sister, Ruth Allen. The Rite of Committal will be held at 1:00 PM on Wednesday, July 7, 2021 at Maple Ridge Cemetery, Delhi Twp. In honor of Ed's great-grandson, Karson Sella, memorial contributions may be directed to Dravet Syndrome Foundation, P.O. Box 3026, Cherry Hill, NJ 08034. Final arrangements have been entrusted to the care of Skorupski Family Funeral Home & Cremation Services, 1550 Midland Rd., Saginaw Twp., MI 48638. Expressions of sympathy may be shared with the family online at www.skorupskis.com.

Edward Quin Scott, Jr., 85, of Lansing, our hardworking, humble, and devoted father, grandfather, brother, uncle, and loyal friend was born into eternal life on the morning of Thursday, July 1, 2021 at The Willows in Okemos. Ed was born in... View Obituary & Service Information

The family of Edward Quin Scott, Jr. created this Life Tributes page to make it easy to share your memories.