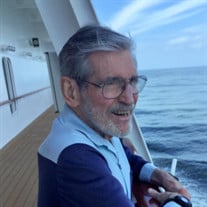 Edward X. (Ted) Tuttle, A.I.A. (American Institute of Architects), died peacefully on November 21, 2021, at the age of 94, after a long illness. He was a resident of the Brookdale Nursing Home in Essexville, Michigan. Born in Ann Arbor, Michigan, to Edward X. Tuttle, Sr. and Betty Frazer Tuttle, Ted grew up in Battle Creek, Michigan and Bronxville, New York. In 1944 he enrolled at Union College (Sigma Chi) in Schenectady, New York, and joined the V12 program (ROTC). In 1946 he was honorably discharged as a Seaman Apprentice in the United States Naval Reserve. In 1947 he re-enlisted in USNR, attaining the rank of Commander in 1963 and retiring in 1967. He married Eunice Standish Scott (“Scotty”) of Chappaqua, New York in 1948, when he was an Ensign aboard the light cruiser USS Providence. They met on a double date with other partners when she was an English major at Smith College and he at Brown University, where he earned a BS in Engineering while also serving as a member of the Naval Officer Training Corps. The conversation they began that night endured for 68 years. After earning an Architecture degree at Princeton University and University of Michigan (Phi Kappa Phi), Ted worked for the architectural firm Giffels and Vallet in Saginaw and Lansing, participating in projects in Europe and the Middle East. He became a Michigan Registered Architect in 1956 and a member of American Institute of Architects in 1957. In 1959 he opened his own architecture business in Southfield, Michigan, and landed the commission to remodel the Battle Creek Gas Company building, completed in 1965. Another early client commissioned a new gas station and diner in Alpena, Michigan. Working with artist Betty Conn, Ted helped design a 30-foot-tall Paul Bunyan lumberjack, made almost entirely of Kaiser auto parts, that could be seen from the highway. Kaiser Paul stands today at Alpena Community College, mascot of the Lumberjacks cross country team. In 1981 he designed and built a house where he lived with Scotty until her death in 2015. It was viewed as an architectural gem in Southfield, and he lived there until failing health forced him to sell it. In the mid-1960s, seeking to widen their social circles, Ted and Scotty became members of Mensa, a round-table organization whose aims are to create a society that is non-political and free from all racial or religious distinctions. The only membership requirement is to score among the top 2% of the population on an intelligence test. By 1967, he was chairman of his local Mensa Research and Discussion Group, whose “salons” were renowned for their probing conversations and wit. Ted and Scotty were grateful for the lifelong friendships they forged from the group. One member, an attorney, persuaded Ted that he was intellectually and temperamentally suited to the law and advised that he would be well positioned as a specialist in architectural and engineering litigation. Following her counsel, he graduated from the Detroit College of Law in 1977 and joined the firm of Denenberg, Tuffley, in Southfield, where he worked until his retirement in 1991. After retirement he continued to consult privately as a forensic architect, but his main occupation became traveling the world, and he and Scotty traversed the globe two or three times, gorging themselves on all its cultural and natural wonders. They would only come home for vacation, he’d say. Ted is survived by a sister, Patricia Gazouleas, a sister-in-law, Sally Scott Aldrich, and three children: Nora Brossard, Nancy Tuttle and Roy Tuttle, as well as a daughter-in-law, Diana Tuttle, three grandchildren: Nicole (Richard Cantley) Tuttle, Erin (Stephen) Kazmierski and Jennifer (Austin) Baker, and six great-grandchildren: Felix and Eleanor Tuttle Cantley, Madeleine and Wesley Kazmierski, and Everett and Lorelei Baker. Fair winds and following seas, oh Cosmic Mariner. Private arrangements have been entrusted to Skorupski Family Funeral Home & Cremation Services, 821 N. Pine Rd., between Ridge & Center. Expressions of sympathy may be shared with the family online at www.skorupskis.com

Edward X. (Ted) Tuttle, A.I.A. (American Institute of Architects), died peacefully on November 21, 2021, at the age of 94, after a long illness. He was a resident of the Brookdale Nursing Home in Essexville, Michigan. Born in Ann Arbor,... View Obituary & Service Information

The family of Edward "Ted" X Tuttle created this Life Tributes page to make it easy to share your memories.

Send flowers to the Tuttle family.