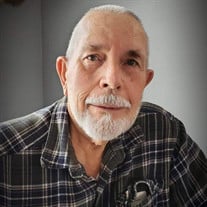 Eldon Marshall Hall, 84, of Merrill, Michigan, our sarcastic, funny and loving father, grandfather, great-grandfather, and brother passed away peacefully on November 3rd, 2021 with his family by his side. Eldon was born on September 9, 1937, in Flint, MI to Virtol Marshall and Mabel Irene Hall. Eldon attended and graduated high school from Owosso Bible College and later, received his bachelor’s degree from Saginaw Valley State College. In 1953, he met the former Mary Cordier. After high school, they married on June 16, 1956 and had 61 wonderful years together. Eldon was employed by Montgomery Ward as a stock boy and Redman’s electric motor company in their accounting department. He then took a job with Dow Corning programming computers and later, Dow Chemical as a systems analyst, retiring in 1994. Eldon was one who never met a stranger. He enjoyed talking to people and hearing their stories, while sharing a few of his own. Eldon (call sign N8STF) enjoyed his HAM Radio hobby; frequently traveling to different states to help other operators fulfill their “county hunting” requests. He was a talented photographer; shooting weddings, senior pictures and other special events. He also taught college photography courses and judged photography competitions at local county fairs. In his earlier years, he enjoyed competitive pistol shooting and square dancing. Eldon was a licensed small aircraft pilot and for many years, was a board member of the Ernie Wallace Memorial Blood Bank. One of his lifetime accomplishments was donating numerous apheresis units and 299 pints of blood, helping hundreds of people live better, longer lives. Eldon leaves to carry his legacy his children, Jacqueline Lundy, Jeanine (Steven) Blair, Jeffrey (Kathy) Hall, Jennifer Hall, Joanna Fisher; 15 grandchildren; 10 great-grandchildren; siblings, Charlena Mason, Virlena Curnow, Beatrice (Larry) Emery and many loving nieces and nephews. Also left behind is his loyal, loving three-legged Border Collie, Trio. Along with his parents, Eldon was preceded in death by his wife, Mary and their son, James. Eldon’s siblings, Dwight Hall, John Hall, and Margaret Allen, also preceded him in death. A Memorial Ceremony will be held on Saturday, November 20, 2021 at 11:00 AM at Merrill Wesleyan Church, 3765 North Chapin Road, Merrill. Memorial contributions may be directed to the wishes of the family. Expressions of sympathy may be shared with the family online at www.skorupskis.com.

Eldon Marshall Hall, 84, of Merrill, Michigan, our sarcastic, funny and loving father, grandfather, great-grandfather, and brother passed away peacefully on November 3rd, 2021 with his family by his side. Eldon was born on September 9, 1937,... View Obituary & Service Information

The family of Eldon Marshall Hall created this Life Tributes page to make it easy to share your memories.

Send flowers to the Hall family.