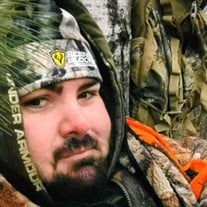 Eric Michael VanSumeren, 35, of Bay City, our humorous and kind father, son, soulmate, brother, uncle, and most loyal friend was born into eternal life unexpectedly on the morning of Thursday, August 12, 2021 at McLaren Bay Region. Eric was born in Bay City on March 14, 1986, the son of Daniel Peter and Judy (LaLonde) VanSumeren. Eric was a 2004 graduate of Garber High School. He was formerly employed with Nexteer Automotive in Saginaw. Through friends, Eric met his soulmate, Kymber Lynch. Their 10 ½ years were blessed with two children and countless memories. Those who knew Eric will forever remember his love of the great outdoors; be it hunting in Gladwin, fishing, or camping with family and friends. Eric always enjoyed sharing a drink and singing karaoke. Always quick with a joke, his witty ways will forever live on. To carry on his legacy, Eric leaves behind his two children, who were the lights of his life, Grayson and Emersyn, and their mother and his soulmate, Kymber Lynch; father, Daniel P. VanSumeren; siblings, Michelle (Robert) Smith and their children, Lexi, Jordyn, and Nolan; Christopher (Amy) VanSumeren and their children, Halee and Sawyer; Amanda (William “BJ”) Beam and their children, Analece, Kaleb, and Sophia; and Andrew VanSumeren (Stephanie Ostash) and their children, Easton, Laina, and Lincoln; honorary aunt, Jan Lambert; honorary siblings, Joshua (Chelsea) Lambert and Jillian Lambert; in-laws, George (Randi) Lynch, Jr., Cammy Knochel, and brother-in-law, Landon (Melissa) Lynch, along with many extended family members and friends. Eric was welcomed home to heaven by his mother, Judy VanSumeren, paternal grandparents, Peter and Theresa VanSumeren, and his maternal grandparents, Mamie and Papa LaLonde, along with many other loved family members. Eric’s family will be present to receive visitors on Monday, August 16, 2021 from 2:00 PM until 8:00 PM with a 7:00 PM Vigil and Sharing of Memories at Skorupski Family Funeral Home & Cremation Services, 821 N. Pine Rd., between Ridge & Center. Please come to share a story with the family. On Tuesday, August 17, 2021, Eric will be taken to St. Jude Thaddeus Parish (St. John the Evangelist Church), 614 Pine St., Essexville, where visiting will continue from 1:00 PM until Eric’s 2:00 PM Funeral Liturgy. Fr. Dale Orlik will officiate with cremation to follow. The entire family would like to thank the doctors and staff at McLaren Bay Region for their amazing care and compassion. In lieu of flowers memorial contributions may be directed to the wishes of the family c/o Kymber Lynch, for the benefit of his children. Expressions of sympathy may be shared with the family online at www.skorupskis.com.

The family of Eric Michael VanSumeren created this Life Tributes page to make it easy to share your memories.

Eric Michael VanSumeren, 35, of Bay City, our humorous and kind...

Send flowers to the VanSumeren family.