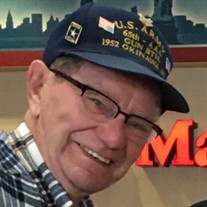 Dick Schneider, 90, of Saginaw, our protective, loyal, and kind, yet feisty husband, father, grandfather, brother, uncle, and friend, passed away peacefully on Saturday, October 2, 2021 at Edgewood Assisted Living. Dick was born in Saginaw on November 18, 1930, the son of the late Ervin Andrew and Margaret Kipfmiller (Wilk) Schneider. He was a 1949 graduate of Saginaw High School. Dick proudly served overseas in Okinawa with the U.S. Army as a radio operator during the Korean Conflict. While at a dance, he happened to meet the former Barbara Sedwick. They dated, fell in love, and were united in marriage on May 15, 1954. Their 67 years were blessed with two children and countless memories. Dick retired after 40 years of service in the food sales business, where he enjoyed his time at Sunshine Biscuit and Northern Trust. He was a member of the American Legion, and in his free time, Dick enjoyed yardwork and tinkering in his garage, golfing, and spending time fishing. In his younger years, Dick enjoyed the family cottage on Lake Huron in Greenbush. Always a “go getter” with a wonderful drive and work ethic, Dick’s motto was “Plan your work and work your plan.” A true family man, Dick’s legacy will live on for years to come. To carry on his legacy, Dick leaves his wife, Barbara (Sedwick); daughter, Teri (Robert) Eberly and son, Jeff (Robin) Schneider; grandchildren, Jill (Robert) Blades, Robert (Deirdre) Eberly, Neal (Cara) Schneider, and Mallory Schneider; great-grandchildren, who were the lights of his life: Josie, James, Lucas, Adalynn, and Vivian; sister, Shirley Powell and her son, Kelly (Casey) Powell; sisters-in-law, Jo Weber, Frances (Russ) Launstein, along with many nieces, and nephews. In addition to his parents, Dick was preceded in death by his brother, Harvie Schneider; brothers-in-law, Richard, Gordon, and Edwin “Jack” Sedwick, and sister-in-law, Viola Day. Dick’s family will be present to receive visitors on Thursday, October 7, 2021 from 4:00 PM until 7:00 PM and again on Friday, October 8, 2021 from 10:00 AM until Dick’s 11:00 AM Life Celebration at Skorupski Family Funeral Home & Cremation Services, 1550 Midland Rd., between State & Gratiot. Burial will be held privately in Roselawn Memorial Gardens. The entire family wishes to extend a heartfelt thanks to Edgewood Assisted Living and Lisa and the entire team at Cardinal Hospice for their compassionate care. Memorial contributions may be directed to the Alzheimer’s Association. Expressions of sympathy may be shared with the family online at www.skorupskis.com.

The family of Ervin Richard "Dick" Schneider created this Life Tributes page to make it easy to share your memories.

Dick Schneider, 90, of Saginaw, our protective, loyal, and kind,...

Send flowers to the Schneider family.