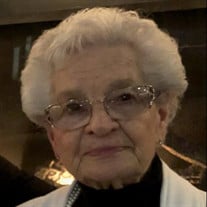 Esther Emelia Helen Morley, 97, formerly of Bay City, Our caring, adventurous, and strong-willed mother and grandmother passed away on the morning of Thursday, November 12, 2020 under the loving care of The Toni & Trish House. Esther was born on May 4, 1923 on a farm near Frankenmuth, the daughter of the late Frederick and Emelia (Ruppel) Hoppe. She worked on the family farm until she went to work at Zehnder’s Restaurant in Frankenmuth, where she met Leslie L. Morley. They married and enjoyed 52 years together, living primarily in the Bay City area, until moving to Lake Ogemaw. Along with raising her children, Esther enjoyed gardening, crocheting, and dancing. She worked in various manufacturing plants and volunteered at the hospital in West Branch well into her nineties. Esther was a true servant of the Lord; she believed in God and performed many duties for her church. Her bright and energetic ways will forever live on. Their marriage was blessed with four children, who all survive: Mary Lou Barringer of Nacogdoches, Texas, Robert (Janice) Morley of Bay City, Michigan, Les Morley of Essexville, Michigan, and Donald Morley of Traverse City, Michigan. Esther leaves behind eight grandchildren, Cheryl (Tom) Christensen, Robert (Torri) Morley, Barbara Dolph, Rebecca (Lester) Buza, Lynne Orlov, Ryan Morley, Brad (Gwen) Neering, and Kelly Neering; eighteen great-grandchildren and four great-great grandchildren; brothers, Fred Hoppe, Jr., John Hoppe, Carl Hoppe, Ernest Hoppe and their families, along with many friends. In addition to her parents, Esther was welcomed home to heaven by her husband, Leslie L. Morley; son-in-law, David R. Barringer; daughter-in-law, Lynne R. Morley; grandson-in-law, James Dolph, and siblings, Elmer Hoppe, Betty Petzold, Donald Hoppe, Helen Koch, June Taylor, and David Hoppe. A Life Celebration in honor of Esther will be held on Wednesday, June 16, 2021 at 11:00 AM with visiting beginning at 10:00 AM at Skorupski Family Funeral Home & Cremation Services, 821 N. Pine Rd., between Ridge & Center. Esther will be laid to rest in Floral Gardens Cemetery. In lieu of flowers, memorial contributions may be directed to The Toni & Trish House. The entire family wishes to extend a heartfelt thanks to Covenant Hospital in Saginaw and The Toni & Trish House for their tender, loving care. Expressions of sympathy may be shared with the family online at www.skorupskis.com.

Esther Emelia Helen Morley, 97, formerly of Bay City, Our caring, adventurous, and strong-willed mother and grandmother passed away on the morning of Thursday, November 12, 2020 under the loving care of The Toni & Trish House. Esther was born... View Obituary & Service Information

The family of Esther Emelia Helen Morley created this Life Tributes page to make it easy to share your memories.

Send flowers to the Morley family.