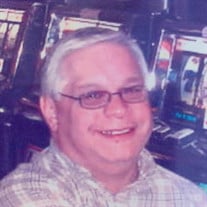 Fred Perez, 71, of Saginaw, went to be with the Lord on Tuesday, December 1, 2020. Fred was born in Saginaw on January 2, 1949, the son of the late Castulo and Gregoria (Escamilla) Perez. He graduated from Douglas MacArthur High School and went on to work for General Motors – Grey Iron Foundry and retired after 40 years of faithful service. Fred enjoyed an occasional trip to the casino and was known for his love of music. Fred was also a faithful parishioner of St. Joseph & St. Dominic Parishes. He never met a stranger and was a true people person. Fred’s positive, upbeat, and easygoing ways will live on in the hearts of his family and friends for years to come. Fred was united in marriage to the former Judith Dashkovitz, who preceded him in death on May 22, 2010. He later was united in marriage to Janice Zahn Garcia, who survives him. Together they enjoyed traveling to different parts of the United States. After blending families, Fred’s family expanded to include step-children, grandchildren, and great-grandchildren. Fred will be deeply missed by his sister, Eva Levario (Rudy Serrato), along with many nieces, nephews, extended family, and friends. In addition to his parents and Judy, Fred was welcomed Home to Heaven by his two daughters, Tina Gale and Virginia Perez Humphrey; brothers, Castulo Perez, Jr., and his sisters, Maria (Raymond) Guadalupe Perez Gonzales and Susie Perez. A private family funeral officiated by Fr. Steve Gavit will take place. Fred’s family will be present to receive visitors on Saturday, December 5, 2020 from 12:00 Noon until 5:00 PM at Skorupski Family Funeral Home & Cremation Services (formerly Reitz-Herzberg), 1550 Midland Rd., between State & Gratiot. Cremation will follow. Memorial contributions may be directed to the wishes of the family. Expressions of sympathy may be shared with the family online at www.skorupskis.com.

Fred Perez, 71, of Saginaw, went to be with the Lord on Tuesday, December 1, 2020. Fred was born in Saginaw on January 2, 1949, the son of the late Castulo and Gregoria (Escamilla) Perez. He graduated from Douglas MacArthur High School and... View Obituary & Service Information

The family of Federico "Fred" Perez created this Life Tributes page to make it easy to share your memories.

Send flowers to the Perez family.