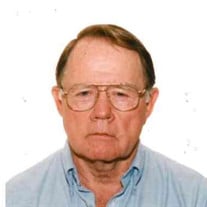 Francis James “Jim” Steinhoff, 94, of Bay City, our loving and hardworking husband, father, grandfather, brother, uncle, and friend passed away on Tuesday, November 10, 2020, at McLaren Bay Region. Francis was born on March 19, 1926, in Bay City, the son of the late John and Fleeta (McIntyre) Steinhoff. Francis served on the Merchant Marine during WWII and in the Marines during the Korean War. After the war, he married June Steinhoff who sadly preceded Francis in death in 1988. In 1990, Francis found love again and was united in marriage to Pohsuan Ng. Francis was a crane builder for AmClyde Engineered Products Company and retired in 1996. He continued on as a consultant until he was 75. Francis enjoyed reading non-fiction, spending time with friends and family, and enjoying an occasional ice-cold beer. Francis leaves to cherish his memory, his wife, Pohsuan; daughter, Jamie Lou Brissette; grandchildren, Stephen Brissette and Kristi Greenwood; sisters-in-law, Pat Steinhoff and Pat Steinhoff, along with many nieces, nephews, and friends. In addition to his parents and June, Francis was welcomed home to heaven by his son, Don Steinhoff; grandson, Dion Greenwood; siblings, Wayne and his spouse, Ben and his spouse, John, Catherine and her spouse, Doris and her spouse, Gerald and his spouse, Frederick, and Richard. Private arrangements have been entrusted to Skorupski Family Funeral Home & Cremation Services, 821 N. Pine Rd., between Ridge & Center. Francis will be inurned in Floral Gardens Cemetery. Expressions of sympathy may be shared with the family online at www.skorupskis.com.

The family of Francis James "Jim" Steinhoff created this Life Tributes page to make it easy to share your memories.

Send flowers to the Steinhoff family.