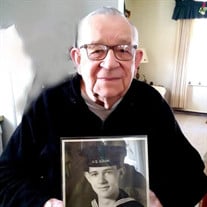 Frederick Clarence Sovia, 94, of Midland, our hardworking and devoted father, grandfather, brother, uncle, and friend passed away on the evening of Wednesday, October 28, 2020 at the Aleda E. Lutz VA Medical Center in Saginaw. Fred was born on October 23, 1926 in Saginaw, the son of the late Clarence and Emilie (Yokat) Sovia. Fred graduated from Coleman High School in 1944 and went on to serve in the U.S. Navy during WWII from 1944-1946, where he was a Messenger on a destroyer, the U.S.S. Glennon. He attended CMU from 1948-1951 and went on to work in the Engineering Department at Dow. He was a Draftsman/Drawer at Dow and was told that some of his drawings were the best in the archives. On October 14, 1960 Fred married the love of his life, the former Beatrice W. Wendt. Fred was a member of the Musical Society of Midland, Dow Male Chorus, and the Midland Cribbage Club. He absolutely loved to dance, especially Ballroom Dancing, and he was a student and teacher at Arthur Murray Dance Studio in New York. Fred enjoyed Broadway Musicals and was an avid card player. He will be remembered and missed dearly for generations to come. Fred leaves to cherish his memory, his son, Paul F. (Lynn) Sovia; eight grandchildren; sister, Carole Sovia of Traverse City, along with several nieces, nephews, and friends. Fred was preceded in death by his wife, Beatrice; parents, Clarence and Emilie; sister, Gertrude Sterba of Owosso, and brother, Elmer Filipiak of Royal Oak. Final arrangements have been entrusted to Skorupski Family Funeral Home & Cremation Services (formerly Reitz-Herzberg), 1550 Midland Rd., between State & Gratiot. Due to COVID-19 restrictions, the attendance for the Funeral Ceremony is limited. Fred’s Funeral Ceremony will be held privately at The Church of Jesus Christ of Latter-day Saints, 1700 W. Sugnet Rd., Midland, on Tuesday, November 3, 2020, at 2:00 PM. Due to COVID-19 restrictions, a family memorial will be held at a later date. Memorial contributions may be directed to The Humanitarian Aid Fund of The Church of Jesus Christ of Latter-day Saints. Expressions of sympathy may be shared with the family online at www.skorupskis.com.

Frederick Clarence Sovia, 94, of Midland, our hardworking and devoted father, grandfather, brother, uncle, and friend passed away on the evening of Wednesday, October 28, 2020 at the Aleda E. Lutz VA Medical Center in Saginaw. Fred was born... View Obituary & Service Information

The family of Frederick Clarence Sovia created this Life Tributes page to make it easy to share your memories.

Frederick Clarence Sovia, 94, of Midland, our hardworking and...

Send flowers to the Sovia family.