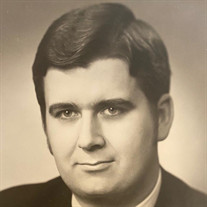 Garry Raymond VanOchten, Sr., 79, of Oscoda, formerly of Frankenmuth, our hardworking and devoted father, brother, uncle, and loyal friend was born into eternal life on the afternoon of Sunday, October 4, 2020 at Angela Hospice in Livonia. Garry was born in Bay City on March 4, 1941, the son of the late Raymond and Marjorie (Deford) VanOchten. He graduated from Bay City Central High School and attended Delta College. While in high school, he met the former Barbara Jean Shawl. They dated, fell in love, and on May 5, 1962, Garry was united in marriage to his high school sweetheart, Barbara. Sadly, she preceded him in death on February 14, 2020. Garry worked as a salesman in the manufacturing industry. He was known for his love of bowling, fishing, Euchre, hunting, and socializing. He was a past member of the Knights of Columbus, where he enjoyed staying active with the council in Tawas. Garry is survived by his sons, Garry VanOchten, Jr., and daughter-in-law Mary Beth VanOchten, of Commerce Township and Brian VanOchten of Traverse City; siblings, Robert (Sherry) VanOchten of Barrington Illinois, Susan VanOchten (Steve Huggard), of Essexville, and Allen (Darleen) VanOchten, of Bay City, along with many nieces, nephews, cousins, and friends. In addition to his parents and his beloved wife, Garry was preceded in death by his daughter, Jody VanOchten; his only grandson, Patrick David Daneluk; sister-in-law, Joan Kukla, and father-in-law and mother-in-law, Joseph and Blanche Shawl. Garry’s family will be present to receive visitors on Thursday, October 8, 2020 from 2:00 PM until 8:00 PM with a 7:00 PM Vigil at Skorupski Family Funeral Home & Cremation Services, 821 N. Pine Rd., between Ridge & Center. On Friday, October 9, 2020, Garry will be taken to St. Jude Thaddeus Parish (St. John the Evangelist Church), 614 Pine St., Essexville, where visiting will continue from 12:00 Noon until Garry’s 1:00 PM Funeral Liturgy. Fr. Jose Maria Cabrera will officiate with the Rite of Committal to follow in St. Patrick Cemetery. In lieu of flowers, memorial contributions may be directed to Michigan Humane Society. Expressions of sympathy may be shared with the family online at www.skorupskis.com.

Garry Raymond VanOchten, Sr., 79, of Oscoda, formerly of Frankenmuth, our hardworking and devoted father, brother, uncle, and loyal friend was born into eternal life on the afternoon of Sunday, October 4, 2020 at Angela Hospice in Livonia. Garry... View Obituary & Service Information

The family of Garry Raymond VanOchten, Sr. created this Life Tributes page to make it easy to share your memories.