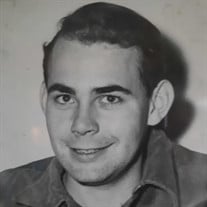 Deacon George Keller, 87, of Bay City, our faithful and devoted father, grandfather, brother, uncle, and friend was born into eternal life on the afternoon of Wednesday, November 25, 2020 at McLaren Bay Region. Deacon Keller was born in Cicero, Illinois on March 20, 1933, the son of the late Lawrence William and Mary Arlene (Dewey) Keller. He proudly served in the U.S. Navy and retired from General Motors - Saginaw Steering Gear. A true servant of the Lord and devout Catholic, Deacon Keller was ordained to the diaconate for the Diocese of Saginaw on June 2, 1977. He is survived by his daughter, Evangeline (Henry) Vaillancourt; grandchildren, George (Terri) Vaillancourt, Jerome (Christine) Vaillancourt, Kristina Auch, and Evan (Rachel) Vaillancourt; brother, Donald (Carol) Keller; sister, Elaine (Richard) Nicham, along with many nieces and nephews. In addition to his parents, Deacon Keller was predeceased by his first wife, the former, Catherine Teusch; infant son, Albert Keller; second wife, Florence Battle, and brother, Lawrence (Mae) Keller. Due to the current COVID-19 pandemic, the Rite of Committal will be held privately in St. Stanislaus Kostka Cemetery. A private family Mass will be held at a later date. In lieu of flowers, memorial contributions may be directed to All Saints Parish. Expressions of sympathy may be shared with the family online at www.skorupskis.com.

The family of Rev. Mr. George Frederick Keller created this Life Tributes page to make it easy to share your memories.

Deacon George Keller, 87, of Bay City, our faithful and devoted...

Send flowers to the Keller family.