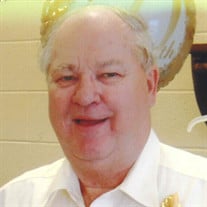 Harry “Pinky” Joseph Lewis, 87, of Bay City, our hardworking and devoted father, grandfather, brother, uncle, and friend passed away at Toni & Trish House on the evening of Thursday, July 29, 2021, one day after his wife’s birthday. Harry was born on December 13, 1933 in Bay City, the son of the late Harry F. and Eugenia R. (Kasprzyk) Lewis. Harry graduated from Central High School, where he enjoyed playing football. He went on to answer the call of his country and proudly served in the U.S. Air Force during the Korean War. On July 24, 1953, in Biloxi, Mississippi, Harry married the love of his life, the former, Nancy Goulet. Together they shared just over 61 years, three wonderful children, and countless memories. Sadly, Nancy passed away on October 2, 2014. Harry worked as a salesman for Frito Lay, and after retirement went on to drive bus for Great Lakes Bus and Mitchell Motorcoach. Harry was a lifetime member of the Elks Club. He enjoyed snow-birding down to Gulf Shores, Florida, with Nancy in their motorhome. They also traveled to all contiguous 48 states, Alaska, Mexico, and Canada. When in Florida they had season tickets to the Tiger’s spring training; watching baseball was a love of Harry’s. He also enjoyed watching the Lions, Michigan football, taking trips to the casino, and being with his family. He will be missed dearly. Harry leaves to cherish his memory, children, Terry (Betty) Lewis, David (Jacquelyn Lacosse) Lewis and Debbie (Howard) Gilbert; grandchildren, Katie (Fernando Cantu) Lewis and Christopher (Jennifer) Lewis; brother, Tom (Janet) Lewis; special friends, Patty Felske, Eileen and Gordie Lange, and Phil Landeryou; along with several nieces and nephews, who lovingly called him “Uncle Pinky.” In addition to his parents and wife, Harry was welcomed home to heaven by his siblings, Delores Sochacki, Jeanette (Bud) McShane, and Barbara (Ed) Wachowski. Final arrangements have been entrusted to Skorupski Family Funeral Home & Cremation Services, 821 N. Pine Rd., between Ridge & Center. Harry and Nancy will be laid to rest in a private Ceremony at Great Lakes National Cemetery. In lieu of flowers, memorial contributions may be directed to Toni & Trish House or All Saints Parish. Expressions of sympathy may be shared with the family online at www.skorupskis.com.

The family of Harry Joseph Lewis created this Life Tributes page to make it easy to share your memories.

Send flowers to the Lewis family.