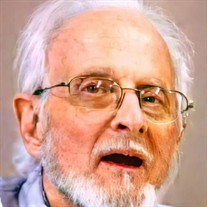 Harry Andrew Pounds, 77, of Essexville, our most loving, supportive, God loving, and Christian husband, father, grandfather, brother and devoted friend was born into eternal life on Tuesday, January 25, 2022 at McLaren Bay Region. Harry was born in Gainesville, Georgia on June 21, 1944 to A.C. and Caroline Pounds. Growing up he spent many summers on his grandparents’ chicken farm in Georgia; they were some of his most beloved memories. He received his Bachelor of Social Work at Eastern Michigan University in 1980. He continued his education at Saginaw Valley State University, where he received his Master of Criminal Justice degree in 1998. On July 12, 1996, he married the love of his life and soul mate, Kim Spalla Pounds at Carroll Park in Bay City. He was a constant motivator and worked hard to keep his family feeling safe and loved always. He will be lovingly remembered as an entrepreneur, as he always wanted to make his own decisions. Harry was an avid reader, walker and traveler. It did not matter where he was going, but he wanted to go anywhere with Kim. To carry on his legacy, Harry leaves his wife of 25 years, Kim Pounds; son, Raymond Pounds; grandchildren, Victoria (Keller) Nelson and family, Sean Keller, Daniel Brunner, Brooklyn Brunner, Haiden Brunner, Isabella Brenay, Jayden Brenay, Kaden Brunner, Nevaeh Brunner, Noah Brunner, and Trinity Brunner; brother, Michael (Shirley) Pounds; sister, Theresa (Akio) Ymada; brother-in-law, Michael (Kim) Spalla, and sister-in-law, Ronda Pardee. Harry was preceded in death by his daughter, Sonya Pounds Keller; parents, A.C. and Caroline Pounds, and mother-in-law, Betty Harnetz. Harry’s family will be present to receive visitors on Saturday, February 5, 2022 at 10:00 AM until the 11:00 AM Funeral Ceremony officiated by Pastor Danny at Bay City 1st Nazarene, 1759 W. Youngs Ditch Rd., Bay City, Michigan 48708. Harry’s family would like to welcome friends to a meal, immediately following the ceremony. Memorial contributions may be made to the wishes of the family. Expressions of sympathy may be shared with the family online at www.skorupskis.com.

The family of Harry Andrew Pounds created this Life Tributes page to make it easy to share your memories.

Harry Andrew Pounds, 77, of Essexville, our most loving, supportive,...

Send flowers to the Pounds family.