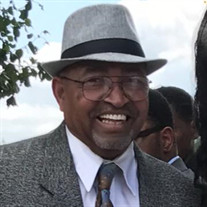 James Edward Brown, 72, of Saginaw, our loving, generous, and larger-than-life father, brother, uncle, and loyal friend went home to be with the Lord on February 1, 2021. James was born in Warthen, Georgia on November 16, 1948. He was the... View Obituary & Service Information

The family of James Edward Brown created this Life Tributes page to make it easy to share your memories.

James Edward Brown, 72, of Saginaw, our loving, generous, and...

Send flowers to the Brown family.