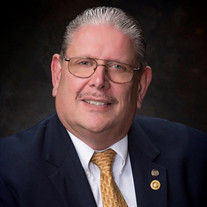 James “Jim” Dale Harmon, 67, passed away unexpectedly on Friday, September 24, 2021. Jim was born on September 1, 1954 in Bay City, Michigan to James Thomas Harmon and Othella Maxine Harmon (Fostin). Jim attended Essexville Garber High School and graduated in 1973. He received his B.A. in Business through Almeda University. Jim proudly worked alongside his father for many years in the family business, Bay Upholstery, becoming the Master Upholsterer. Jim later expanded the scope of services to include custom built furniture under a new umbrella, Bay Designs. Jim’s greatest treasure in life was his family. He is survived by the love of his life Debra J. Harmon, his 2 daughters Paige (Kenneth) Niles, Katelyn (David) Hutcherson and grandchildren Jonathan, Mackenzie, Nicholas and his sweet “Magger” Maggie Hutcherson. Keeping Jim in line (with a lot of love involved) were his sisters, Marsha (James) Kaufmann and Marilyn (Guy) Abbs, affectionately known as “The Sisters.” Jim leaves behind a sister-in-law, Inez Harmon, the immediate family of Debra Harmon, many nieces, nephews, cousins, and dear friends, as Jim never met a stranger. He was preceded in death by his parents; brother, David Harmon, and nephew, Brent Thomas Abbs. Jim’s passion was building; whether it was building furniture, a business venture or most importantly, building relationships in the community. He dedicated his life’s work to helping businesses achieve financial success, giving back to the community, and bringing people together. He was a man of strong faith and a member of North River Church following the beliefs of “service above self.” Jim was a Past Master of Joppa Lodge #315 and Elf Khurafeh Shrine, driving hospital vans. He served as a City Commissioner in Essexville for several years as well as on the board for B.A.S.I.S. His dedication to helping others led to his many years of working in the non-profit sector throughout the southern US for organizations such as Rotary’s Camp Florida, Montgomery ARC, and Union Juvenile Residential Facility. He also enjoyed working for Walt Disney World as Disney Security Office Coordinator. A private Celebration of Life was held on Sunday September 26, 2021 in Parrish, FL. Memorial contributions may be directed to the wishes of the family. Expressions of sympathy may be shared with the family online at www.skorupskis.com.

The family of James Dale Harmon created this Life Tributes page to make it easy to share your memories.

Send flowers to the Harmon family.