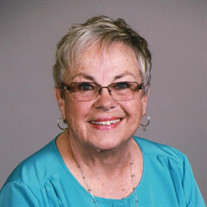 Janet Marie Maillette, 78, of Bay City, our beautiful, kind and most loving mother, Mimi, sister, and loyal friend was born into eternal life the afternoon of Monday, March 28, 2022 with her family by her side. Janet was born in Hampton Twp. to the late Steve and Ethel (Boeraker) Esterhai on April 24, 1943. She graduated from St. John’s High School in 1961. That same year, Janet was crowned the Munger Potato Queen. Janet married her high school sweetheart, Gary Anthony Maillette, on May 12, 1962. Sadly, he preceded her in death on November 9, 1978. Janet retired from Bangor Township Schools as a bus driver after 30 years of dedicated service. She was a devout Catholic and a long time member of Visitation Parish. Janet was known for her love of baking and cooking, especially her famous stuffed cabbage. She loved tending to her garden and took meticulous care of her flowers. Janet loved listening to Polka bands, and loved her special trip to Missouri to see Danny O’Donnell. Euchre was her game of choice. Little in life was more important to Janet than her family. She was a beautiful soul inside and out, who will be deeply missed by all who knew and loved her. To carry on her legacy, Janet leaves her children, Michelle (Gary) Conklin, Todd (Mila) Maillette, and Lisa (Paul) Irish. She was the loving Mimi of Blair (Stephanie) Conklin, Ariana Conklin, Jacob Maillette, Mallory Irish (Mason VanSumeren), Garrett Irish (Brooke McCann) and Brennan Irish. She was the devoted great Mimi to Eli, Emma, and Ila. Janet also leaves behind her brothers, Wayne (Elvia) Esterhai and Lyle (Jeanette) Esterhai; dear friend of 54 years, Lola Walraven, along with many in-laws, nieces, nephews and friends. The family wishes to extend their deepest thanks to Mitch from NICU, 4East and all of McLaren’s staff for the exceptional care they gave to Janet. The family would also like to thank special local angels, Lisa and Mallory, for all the love and care they provided. Janet’s family will be present to receive visitors on Friday, April 1, 2022 at 4:00 PM until 8:00 PM, with a Vigil at 7:00 PM at Skorupski Family Funeral Home & Cremation Services, 821 N. Pine Rd., between Ridge & Center. On Saturday, April 2, 2022, Janet will be taken to St. Jude Thaddeus Parish, 614 N. Pine St., Essexville, where visiting will continue at 10:00 AM until her 11:00 AM Funeral Liturgy. Father Dale Orlik to preside. Rite of Committal to be held privately at St. Patrick Cemetery. Memorial contributions may be directed to the wishes of the family. Expressions of sympathy may be shared at www.skorupskis.com.

Janet Marie Maillette, 78, of Bay City, our beautiful, kind and most loving mother, Mimi, sister, and loyal friend was born into eternal life the afternoon of Monday, March 28, 2022 with her family by her side. Janet was born in Hampton Twp.... View Obituary & Service Information

The family of Janet Marie Maillette created this Life Tributes page to make it easy to share your memories.

Janet Marie Maillette, 78, of Bay City, our beautiful, kind and...

Send flowers to the Maillette family.