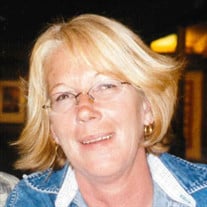 Janet Marie Trask, 64, of Essexville, our beautiful, feisty, kind, intelligent, and most loving wife, mother, grandmother, sister, aunt, and loyal friend was born into eternal life on the evening of Sunday, May 1, 2022 at her home with her family by her side. Janet was born on April 6, 1958 to the late John Keith Boyd and Verna Mae (Travis) Boyd Hopp in Springfield, Missouri. Growing up, she spent most of her time with her best friend, Sheri Rhynard "partner in crime." Janet graduated from Bay City Central High School in 1976. Upon graduating, she attended the Delta College Fire Science Program. Janet met the love of her life, Kenneth Thomas Trask, as teenagers. They dated, fell in love, and were united in marriage on December 13, 1975. Together they shared over 47 years and countless memories. Janet was an Emergency Medical Technician and Fire Lieutenant for Hampton Township Fire Department. She was in the force for over 18 years until her retirement in 2009. Janet was a dedicated firefighter and enjoyed serving her community. She loved flowers of all colors; every flower was her favorite. Janet liked to express herself by painting, drawing, or coloring. She could be found out shopping almost anywhere. Janet had a passion for coffee, but nothing was more important than family, especially her grandchildren. Janet's memory will live on in the hearts of many for years to come. To carry on Janet's legacy, she leaves her devoted husband of 47 years, Ken; her children, Stacie M. (Brian) Cook, Kelvin T. Trask, and Tabaitha L. Trask, and her grandchildren, who were the lights of her life, Evan, Nohlan, Nova, Emarie, Bria, Grace and Isabella. Janet also leaves her siblings, Paul (Sharon) Boyd, Daniel Boyd, Monica (Bob) Gauthier, Sherry VanTol, William (Jeri) Hopp, and Terry (Patti) Hopp; mother-in-law, Marylou Trask; sister-in-law, Michelle (Jack) Huffman; brothers-in-law, Keith Trask, Bill (Dar) Trask, and Michael Trask, along with many nieces, nephews, cousins, and friends. In addition to her parents, Janet was welcomed home to Heaven by her step-father, William Howard Hopp; step-brother, Rick Hopp; father-in-law, Lloyd Lawson Trask, and brother-in-law, Craig Trask. Janet's family will be present to receive visitors on Friday, May 6, 2022 from 2:00 PM until her 7:00 PM Memorial Ceremony at Skorupski Family Funeral Home & Cremation Services, 821 N. Pine Rd., between Ridge & Center. Reverend Jimmy Riley will preside. Memorial contributions may be directed to the wishes of the family. Expressions of sympathy may be shared with the family online at www.skorupskis.com.

Janet Marie Trask, 64, of Essexville, our beautiful, feisty, kind, intelligent, and most loving wife, mother, grandmother, sister, aunt, and loyal friend was born into eternal life on the evening of Sunday, May 1, 2022 at her home with her family... View Obituary & Service Information

The family of Janet Marie Trask created this Life Tributes page to make it easy to share your memories.

Send flowers to the Trask family.