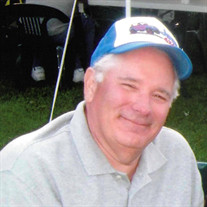 Jay Raymond Bradshaw, 77, our honorable, loving, spiritual and devoted husband, father, grandfather, brother and friend, went to be with his Lord Jesus Christ on February 8, 2022 at McLaren Bay Region. Jay joined this Earth on November 5, 1944, to the late Raymond and Virginia (Eastman) Bradshaw. As a young boy, Jay always loved spending time outdoors, especially in the snow. He would be out there for hours, and his mom would have to call him in several times before he would come in for dinner. After high school, Jay went on to honorably serve in the United States Army. He was always proud of his service as a cryptographer. Jay received many honors while in the military. He received a National Defense Service Medal and an Expert Sharpshooter Badge. He was active from 1965 through 1969, and he then remained in the reserves until 1971. Upon completion of Jay’s military service, he became a Deputy Sheriff in Arizona and eventually transitioned to a Probation Officer. Jay was highly respected in his career and retired in December 1997. At his retirement party, every judge, active and retired, came to offer their well-wishes and support. Jay and Linda were united in marriage on January 5, 1998, in Las Vegas. They were blessed with 24 wonderful years and countless memories together. They were truly an inseparable team. After retirement, Jay and Linda moved to Michigan. They joined All Saints Parish – St. Boniface Church. They became lay ministers. Jay truly loved the Lord, and consistently volunteered his time to serve others. Jay was a part of the Christian Service Commission, Food Pantry, and volunteered for the American Red Cross. Jay was always ready to help anyone, always had a positive attitude, and carried a smile with him wherever he went. He truly lived a life of service. Jay also enjoyed fishing, wood working, camping, and to Linda’s dismay, watching the Freighters at the Soo Locks. Jay lived life to the fullest; he would often tell people “I’ve never been bored a day in my life.” To carry on Jay’s legacy is his devoted wife of 24 years, Linda; daughters, Angela ( John) Napper and Patty (Stan) Ramsay; stepsons, Joel Baese, and Joshua (Krissy) Baese; 11 grandchildren; brother, Bill Bradshaw; mother-in-law, Elaine Cardinal; sister-in-law, Lori Cardinal; brother-in-law, John (Pat) Cardinal; loving extended family, Karen and Benny Windsor, Carol and Rich Odell, John and Keli Warren, Chris and Denny Richards, Aunt Mary Anne Dembowske and the entire Dembowske Family, special angel – Val, and wonderful church family that he deeply cherished. Jay was welcomed home to heaven by his parents, Raymond and Virginia Bradshaw. Jay’s family will be present to receive visitors on Monday, February 14, 2022 from 2:00 PM until 6:00 PM, with a vigil at 6:00 PM at Skorupski Family Funeral Home & Cremation Services, 821 N. Pine Rd., between Ridge & Center. Visiting will continue on Tuesday, February 15, 2022 at 10:00 AM until his Funeral Liturgy at 11:00 AM at All Saints Parish (St. Boniface Church), 510 N Lincoln St, Bay City, MI 48708, with Father Steve Fillion to preside. Interment will take place at St. Patrick Cemetery. Memorial contributions may be directed to the wishes of the family.

The family of Jay Raymond Bradshaw created this Life Tributes page to make it easy to share your memories.

Send flowers to the Bradshaw family.