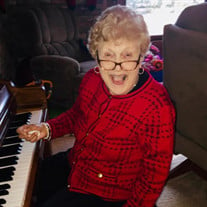 Joan Olive (Paine) Brashaw, 89, of Bay City, our devoted mother and “Grandma B” passed away on Sunday, January 3, 2021 at Bay Medical Care Facility. Joan was born in Bay City on June 9, 1931, the daughter of the late Floyd Paine and the former Avis Shook. She graduated from Bay City Central High School and was united in marriage to Morris George Brashaw on October 15, 1952, after he returned home from his stateside service in the Korean War. Those who knew Joan will forever remember her love of music; she was an exceptionally talented piano player and played the organ at her church, Bay City First Church of the Nazarene. In her free time, Joan was known for her “occasional” shopping trips. She will forever be remembered for her love of her family. Joan leaves to carry on her legacy, her children, Bethany (Richard) Loree and Morris (Janet) Brashaw; grandchildren, Matthew Loree and Ashley (David) Bergman; great-grandchildren, who were the lights of her life, Garrett, Logan, and Gracelyn Bergman; brother-in-law, Jim Brown; step-brother, Duane (Nancy) Howitson, along with many Brashaw in-laws and several nieces and nephews. In addition to her parents, Joan was welcomed Home to Heaven by her husband of 68 years on December 15, 2020, Morris, along with her step-father, Al Sovey; step-mother, Jo Paine; sister, Avis Brown, and step-sister, Nancy (Ed) Rick. Private arrangements have been entrusted to Skorupski Family Funeral Home & Cremation Services, 821 N. Pine Rd., between Ridge & Center. Memorial contributions may be directed to the Alzheimer’s Association or American Diabetes Association. Expressions of sympathy may be shared with the family online at www.skorupskis.com.

The family of Joan Olive (Paine) Brashaw created this Life Tributes page to make it easy to share your memories.