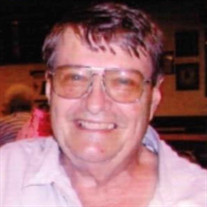 John Carter Walther, 91, of Essexville, passed away on Wednesday, December 15, 2021 at McLaren Bay Region. John was born in Bay City on September 16, 1930, the son of the late John and Harriet (Carter) Walther. He graduated from Bay City Central and went on to proudly serve in the U.S. Air Force during the Korean Conflict. John worked for General Motors – Bay City Powertrain, where he retired as an Electrical Engineer. John was also the former proprietor of “Mothers’,” the record store located on Woodside in Essexville. Always quite the collector, John was known especially for his ice cream scoops, records, and Star Wars collections. He loved rummage sales and tending to his daily crossword puzzles. He enjoyed spending time with his brothers and family at the cabin on Higgins Lake. Above all, John will be remembered for his wonderful sense of humor. To carry on his legacy, John leaves his children: Cheryl Cameron (Steve), Pamela Love, and Michael (Wanda) Walther; four grandchildren; brothers, William (Shirley) Walther and Gary (Mary) Walther; many nieces and nephews; beloved companion of 30 years, Sharon Moore, and her daughters, Shelly, Dawn, Wendy, and Shannon, along with his loving dog, Boots. In addition to his parents, John was preceded in death by his daughter, Susan, and mother of his children, Joyce Newcombe. A private funeral officiated by Pastor Joe Atchinson will be held at Skorupski Family Funeral Home & Cremation Services, 821 N. Pine Rd., between Ridge & Center. Private interment will follow in St. Patrick Cemetery. Please click the following link to view the ceremony live https://client.tribucast.com/tcid/1414620716. The entire family wishes to extend a heartfelt thanks to the staff of McLaren Bay Region and New Hope Bay for their compassionate care. In lieu of flowers, memorial contributions may be directed to the Humane Society of Bay County. Expressions of sympathy may be shared with the family online at www.skorupskis.com.

John Carter Walther, 91, of Essexville, passed away on Wednesday, December 15, 2021 at McLaren Bay Region. John was born in Bay City on September 16, 1930, the son of the late John and Harriet (Carter) Walther. He graduated from Bay City Central... View Obituary & Service Information

The family of John Carter Walther created this Life Tributes page to make it easy to share your memories.

John Carter Walther, 91, of Essexville, passed away on Wednesday,...

Send flowers to the Walther family.