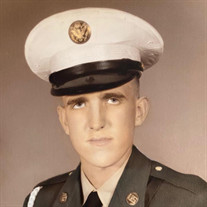 John Sylvester Inda, 79, of Essexville, our hardworking and devoted husband, father, grandfather, brother, uncle, and friend was born into eternal life on the afternoon of Thursday, October 29, 2020 at his home. John was one of eleven children, born to the late Stanley and Agnes (Fisher) Inda on a farm near Port Austin on July 20, 1941. He graduated from North Huron High School in 1958 and enlisted in the U.S. Army, honorably serving as a Military Police Officer for three years, including thirteen months in Korea. He then entered the U.S. Air Force, serving from 1962-1966 as a Sentry Dog Handler. In 1966, John hired into General Motors – Saginaw Steering Gear, and retired in 1997. In 1968, John went on a blind date, set up through his best friend Roy Ebel. He fell in love with the former Patricia Hill and was united in marriage on January 3, 1970. A devout Catholic, John’s faith sustained him through his life. He enjoyed fishing, hunting, and playing cards with his buddies in his backyard under the big oak tree. He also enjoyed tending to his garden, especially his raspberry patches, and canning the many items in the garden. John’s wonderful sense of humor would light up the entire room and was with him until the very end. His memory will live on in the hearts of his family and friends for generations to come. John leaves to carry on his legacy, his wife of 50 years, Patricia Inda and their children, Jodie Bradbury, Penny Inda (Matt Anderson), and James Inda (fiancée, Brittany Lambert); grandchildren, Ryan (fiancee Katelyn Fifield), Connor, Jessica, Sarah, Kaylyn, and Kiera; great-grandchildren: Tyler, Bryson, and Brooklynn; siblings, Delores (Gordon) Umbrit, Lorraine Holtz, Mary (Lee) O’Dell, Frank (Donna) Inda, Donald (Carol) Inda, Donna (Al) Delino, and Kate Harrison, along with many nieces, nephews, and special friends. In addition to his parents, John was preceded in death by his sisters, Wanda, Dorothy, and Joann, and his three brothers-in-law, Dewey, Bob, and Virgil. The Funeral Liturgy will be celebrated at 11:00 AM on Monday, November 2, 2020 at St. Jude Thaddeus Parish (St. John the Evangelist Church), 614 Pine St., Essexville. Fr. Dale Orlik will officiate with Military Honors and cremation to follow. Visiting will be held at Skorupski Family Funeral Home & Cremation Services, 821 N. Pine Rd., between Ridge & Center, on Sunday from 3:00 PM until 7:00 PM and at church on Monday after 10:00 AM. The entire family wishes to extend a heartfelt thanks to Compassus Hospice for their compassionate care. Memorial contributions may be directed to Compassus Hospice’s Hospice Angels Foundation. Expressions of sympathy may be shared with the family online at www.skorupskis.com.

John Sylvester Inda, 79, of Essexville, our hardworking and devoted husband, father, grandfather, brother, uncle, and friend was born into eternal life on the afternoon of Thursday, October 29, 2020 at his home. John was one of eleven children,... View Obituary & Service Information

The family of John Sylvester Inda created this Life Tributes page to make it easy to share your memories.

John Sylvester Inda, 79, of Essexville, our hardworking and devoted...

Send flowers to the Inda family.