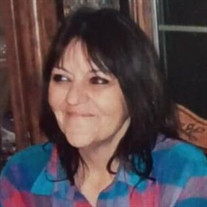 ALGER, MI - Kelly Ann Klemmer, age 60, passed away surrounded by loving family and friends on April 16th, 2021 at 1:35 p.m. in Bay City, MI. Kelly was born on February 18th, 1961 to Wayne and Caroline (Johnson) Provo. Kelly was a daughter, sister, mother, grandmother, and friend who had overcome many trials and tribulations in her life. Through it all, she never lost her faith in Jesus. She was a warrior who fought the good fight and loved her Lord and her family. She would say the world could always use another kind person. She loved church gatherings, fireworks, cooking, nature, the Florida Keys, laughing and smiling. Her smile brightened any room she was in, it was so contagious it made the sun jealous. She was one of the best secret keepers and always had the best advice. She was a one-of-a-kind woman and taught each and every one of us something. Through all of her life experiences, you never saw the light in her eyes dim. She kept her head high and her face strong. She had faith like no other and that will be remembered by everyone. Even in her darkest days she never gave up when most people would have. The world is less bright without her, but she will be remembered through generations to come. Her life was a living example of the Bible verse Ephesians 4:32 "And be kind to one another, tenderhearted, forgiving one another, even as God in Christ forgave you". In addition to her husband, William Klemmer, she leaves two daughters, Judy Murphy and Heidi Murphy, and a son, Ben Murphy; six grandchildren, Billy Aviles, Marissa Benjamin, Davon VanWormer, Sence VanWormer, Summer VanWormer, and Jude Schieman; two great-grandchildren, Amaziah Aviles and Laynie VanWormer; two grandsons-in-law, Billy Benjamin and Keith Aviles, and one granddaughter-in-law, Victoria VanWormer; two sons-in-law, Lance Schieman and Lonny Pease; friend, Cass Charnoske; sister, Cindy Maynard; and many nieces and nephews. A Celebration of Life for Kelly will be announced by the family at a later date. Arrangements have been entrusted to Skorupski Family Funeral Home & Cremation Services, 821 N. Pine Rd., between Ridge & Center. Expressions of sympathy may be shared online at www.skorupskis.com

The family of Kelly Ann Klemmer created this Life Tributes page to make it easy to share your memories.

Send flowers to the Klemmer family.