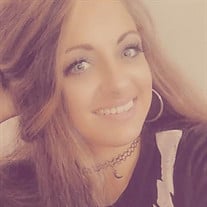 Kelsey Linn Hatfield, 26, of Bay City, our beautiful, funny, independent, quick-witted, loving, and kind daughter, granddaughter, soul mate, niece, cousin, and friend went Home to Heaven far too soon on Thursday, January 7, 2021 at McLaren Bay Region in Bay City. Kelsey was born on January 31, 1994 in Bay City, the most beloved daughter of Michelle (Maus) Wiechec and Gary Hatfield. She was full of life and enjoyed eating out-making sure to put ranch on everything, cooking, laughing, being with her friends, and having a good time. Kelsey was famous for her hilarious one-liners and occasional stubbornness. She was a social butterfly and had the kind of jokes that would make you laugh until you cried. Kelsey was a light to so many people. Her free spirit, friendship, laughter, and love will be missed so very dearly. Kelsey leaves to cherish her memory, her parents, Michelle (Don) Wiechec and Gary Hatfield; soul mate and beloved boyfriend, Brandon Anderson; grandparents, Janet (Ron) Wagner and Bob and Rosella Hatfield; aunts and uncle, Christine Yax, David Hatfield, and Angela Davis; cousins, Zaryn Marsh, Zan Marsh, Lauren Hatfield, Collin Hatfield, and Emily Davis; her friend first and cousin second, Samantha Brunner, along with many second cousins and countless friends. Kelsey was welcomed Home to Heaven by her grandfather, David Maus; great-grandparents, Alice Villano, Louella L’Heuruex, and John L’Heuruex; aunt, Karen L’Heuruex; special cousins, Josh L’Heuruex and Zak Marsh, along with her beloved fur baby, Ol’Man, whom she loved fiercely as if he were her child. A Memorial will be held on Kelsey’s birthday at 6:00 PM on Sunday, January 31, 2021 at Bay City State Park, 3582 State Park Dr., Bay City, MI 48706. Final arrangements have been entrusted to Skorupski Family Funeral Home & Cremation Services, 821 N. Pine Rd., between Ridge & Center. In lieu of flowers, memorial contributions may be directed to the wishes of the family. Expressions of sympathy may be shared with the family online at www.skorupskis.com.

The family of Kelsey Linn Hatfield created this Life Tributes page to make it easy to share your memories.

Send flowers to the Hatfield family.