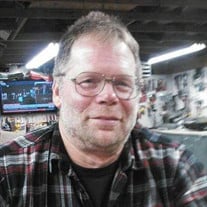 Kenneth Alexander DeBats, 62, of Bay City, our persistent and strong-willed husband, and grandfather passed away unexpectedly on Monday, April 19, 2021. Ken was born in Bay City on January 9, 1959, the son of the late Kenneth Herman and Nancy Katherine (Friesorger) DeBats. He was a 1978 graduate of Bay City Central High School. While out one night, Ken met the former Nancy Lukowski. They dated, fell in love, and were united in marriage on May 20, 1988. Ken worked as a mechanic and was known for his love of the great outdoors. He was most at peace when he was deer hunting, fishing, and camping – especially in Rose City. Ken will also be remembered for his love of dogs, especially his beloved German Shepherds. He had a wonderful charisma, quick wit, and always believed in doing things right the first time. To carry on his legacy, Ken leaves behind his wife, Nancy and children: Kari Jo (Matt) Urban, Kenneth Harold (Lisa) DeBats, and Katie Lynn DeBats. He was the proud and loving “Super Grandpa” of Isabelle Urban and also leaves behind his sister, Debbie (Sam) Butterfield; mother-in-law, Dorothy Malone; sister-in-law, Marguerite DeBats, along with many nieces and nephews. In addition to his parents, Ken was preceded in death by his brother, Ricky DeBats and father-in-law, Harold Malone. Private arrangements have been entrusted to Skorupski Family Funeral Home & Cremation Services, 821 N. Pine Rd., between Ridge & Center. A Life Celebration will be announced at a later date. Memorial contributions may be directed to the wishes of the family, c/o Nancy DeBats, P.O. Box 127, Essexville, MI 48732. Expressions of sympathy may be shared with the family online at www.skorupskis.com.

Kenneth Alexander DeBats, 62, of Bay City, our persistent and strong-willed husband, and grandfather passed away unexpectedly on Monday, April 19, 2021. Ken was born in Bay City on January 9, 1959, the son of the late Kenneth Herman and Nancy... View Obituary & Service Information

The family of Kenneth Alexander DeBats created this Life Tributes page to make it easy to share your memories.

Kenneth Alexander DeBats, 62, of Bay City, our persistent and...

Send flowers to the DeBats family.