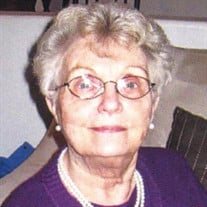 Lois Lee Pettyes of Bay City, Michigan, passed away at home, July 15, 2021. Lois was twice widowed, her first husband, Vince Duranceau from Alpena, and then, later Jim Landrie in Bay City. Lois was born in Alpena, Michigan to Tom and Helen, in 1931. The family was a typical Alpena working class family, (Thunder Bay Quarry, Cement Plant, Abitibi, Fletchers) and as she said, many times to her children, “I grew up in the Depression.” Lois grew up with two younger brothers, Jon and David. She went to St. Anne’s Elementary School, and then chose Alpena High School, as it was only a few blocks from her house, over St. Anne’s High School. Lois was popular at Alpena High and ultimately became drum major of the high school band. After high school, she attended County Normal, a teacher training school in Alpena. She had a memorable experience teaching at the Sanborn School in Ossineke, teaching eight grades in one classroom. Lois met Vincent Duranceau, an Alpena Navy veteran, while out with friends in Alpena. Lois and Vince were married in Alpena in 1952. The next year they moved to Bay City as Vince got a job at The Bay City Times. They bought their first house on Sheridan Street in 1954 and their first child Tom arrived. Lois devoted her next years to the family as son Tim arrived in 1957. Later son John came in 1962, named after the President. Lois was active in her children’s lives and education. The Sheridan Street neighborhood in the 50’s and 60’s were filled with families and tons of children were running through the yards, including the neighbors the Sebalds, the Nearings and the Durochers. In 1966 the family moved to a bigger house on North McLellan and Lois began attending St. Boniface Church, a Church family that was important to her for the next 55 years. Daughters Ann, 1966 and Amy, 1969 arrived at the McLellan Street house to complete the family. Lois always appreciated further education and in 1975, she began to go after her own education at Delta College part time. She finished Delta College and then began to attend Saginaw Valley State, in the social work curriculum, as she enjoyed helping people. After her older children left home on their own, and after service with a number of agencies helping people in Bay City, Lois decided to maximize her education by going to Ann Arbor to the University of Michigan to work on a Masters in Social Work. She went to Ann Arbor a few days a week and was back in Bay City the other days. In two years she completed her MSW when she was over 50 years old, a major accomplishment. She then had a job for many years at Saginaw County Mental Health, helping adults and children. After the death of her first husband in 1985, later Lois met Jim Landrie at church and they began dating until they were married in 1994. Jim and Lois did much traveling around the United States to the west coast and Florida, including visiting family in Arizona. Jim became ill a few years later and Lois cared for him until his death. Lois’s post retirement activities were very important to her including, her lay ministry at St. Boniface. Her son called her, “my mother, the priest.” Lois also was an award-winning Red Cross disaster area volunteer, counseling people, including tornado ravaged Alabama. She also felt useful in helping adults and children at Golden Horizons. She enjoyed also unique trips to Hawaii, San Diego, and Napa, to see a high school friend. Ultimately Lois was very proud of the children and grandchildren who studied and completed college education, as she did. She enjoyed having a special friend, Ted, when both were widowed, in later life. Lois is survived by four children, Tom (Susie) of Bay City, son John of Bay City, Ann (David) of Bar Harbor, Maine, and Amy (Karl) of Bay City. Lois lost her second son, Tim in 1980. She has three grandchildren, including, Alec of Tucson, Joshua of Traverse City, Christopher (Heather) of Montgomery, Illinois, and an adopted grandson, Marty of Phoenix. Lois also had great grandchildren, Brooklyn, Crew, Aubrey, Taliesin, and Vash. Lois is survived by her two younger brothers, Jon of Clinton Township and David of Bloomfield Hills. Lois also had many nieces and nephews. The Funeral Liturgy will be held at 11:00 AM on Saturday, July, 24, 2021 at All Saints Parish (St. Boniface Church), 510 N. Lincoln St., Bay City. Fr. Stephen J. Fillion will preside with the Rite of Committal to follow in St. Patrick Cemetery. Visiting will be held on Friday from 5:00 PM until 9:00 PM with a 7:00 PM Vigil at Skorupski Family Funeral Home & Cremation Services, 821 N. Pine Rd., between Ridge & Center, and again at church on Saturday after 10:00 AM. Memorials in memory of Lois to All Saints Parish would be greatly appreciated. Expressions of sympathy may be shared with the family online at www.skorupskis.com.

The family of Lois Lee Pettyes (Duranceau, Landrie) created this Life Tributes page to make it easy to share your memories.