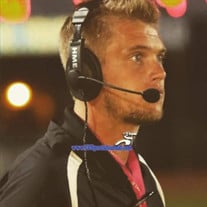 Lucas Daniel Buczek, 34, our compassionate, loving, and enthusiastic son, brother, nephew, cousin, and loyal friend was born into eternal life unexpectedly on Thursday, February 18, 2021 at his residence in Florida. Luke was born in Holland, Michigan on August 17, 1986, the son of Rick and Kelly (Higgs) Buczek. He was a graduate of Freeland High School and graduated with his Bachelor of Business Administration from Northwood University. Always one to give back, Luke volunteered as an assistant football coach at Freeland High School. He continued his studies at Concordia University in Chicago, receiving his Master’s Degree in Sports Management/Education. While in Chicago, Luke worked as an Assistant Football Coach at the University of Chicago. He also worked as a graduate assistant football coach at Concordia University. Luke loved coaching and teaching, and was currently employed as a school teacher at Dan McCarty School and Treasure Coast High School, both in Fort Pierce, Florida. He was also the varsity high school football and varsity girl’s flag football coach at Fort Pierce Central High School and the coach of the Eagles at Dan McCarty Middle School. A natural sports enthusiast, Luke loved football, hockey, and baseball, and was a huge University of Michigan sports fan. His hobbies included playing sports, reading and above all, time spent with his friends. Luke was most proud of his role as a player’s assistant at the U.S. Army Bowl in San Antonio, Texas in 2017, which featured the best high school football players from around the country. He was also nominated again for the 2021 game, which was canceled due to the corona virus. Luke inspired others and was a dedicated and proud coach. He was enormously proud of his 2018 girls’ varsity flag football team at Fort Pierce Central High School, who won the district championships. For this, he was honored with a Coach of the Year Award in his first season with the girl’s team. Also, in the Fall of 2018, he received an award ball for his help in having the most shutouts in a season and the fewest points allowed during the football season with the University of Chicago. Luke will forever be missed and leaves to carry on his legacy, his parents, Rick & Kelly Buczek; brother, Michael Buczek; uncles, Kim Higgs and Kurt Higgs; aunts, Kyle Higgs Tarrant and Mary Buczek; cousins, Sean and Skyler Buczek, Matt Tarrant, and Kevin Higgs, along with many second cousins, great aunts and uncles, and countless friends. Luke was warmly welcomed Home to Heaven by his paternal grandparents, Edward & Jacqueline Buczek; maternal grandparents, Arthur & Jane Higgs, along with his uncles, John and Jeffrey Buczek. Fr. Dale Orlik will officiate a private family funeral. Luke’s family will be present to receive visitors on Tuesday, March 9, 2021 from 2:00 PM until 8:00 PM at Skorupski Family Funeral Home & Cremation Services (formerly Reitz-Herzberg), 1550 Midland Rd., between State & Gratiot. Memorial contributions in memory of Luke may be directed to a charity of the donor’s choice. Expressions of sympathy may be shared with the family online at www.skorupskis.com.

The family of Lucas Daniel Buczek created this Life Tributes page to make it easy to share your memories.

Send flowers to the Buczek family.