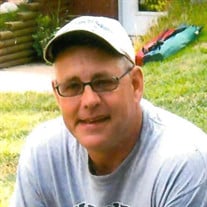 Mark Allen Riselay, 58, of Freeland, our funny, caring, helpful, and smart husband, father, son, grandfather and brother passed away on Monday, August 30, 2021, at Michigan Medicine in Ann Arbor after a courageous battle with leukemia. Mark was born in Saginaw, Michigan on March 1, 1963, to Maurice and Edna (Wagner) Riselay. Mark attended and graduated from Arthur Hill High School. He joined the U.S. Marine Corps in 1984 and served in Okinawa, Japan; serving until 1988. He then went on to serve with the Army National Guard and retired in 2015 of honorable service. He met the former Kathy Keating in 2005; they dated, fell in love, and were married in 2009. Mark enjoyed fishing, hunting, and spending time with family and friends. Mark was always willing to give to and help others. Mark leaves to carry his legacy, his wife, Kathleen; his mother, Edna Hanson; son, David (Erica) Fuentes; stepchildren, Savannah (John) Ardoin, Emily Glumm, and George Glumm; step grandchildren, Skylar, Skarlett, Shea, Silas Ardoin; his siblings, Maurice D. Riselay, Barb (Oz) Wotchko, Diane (Galen) Turner, Deb (Cliff) Porter, and Mary (Tod) Richard; along with many nieces and nephews. Along with his father, Mark was predeceased by his brother, Duane Riselay. Mark’s family will be present to receive visitors on September 11, 2021, at 11:00 AM until his 1:00 PM Memorial Ceremony at Skorupski Family Funeral Home & Cremation Services, 1550 Midland Rd., between State and Gratiot. Inurnment will take place at Great Lakes National Cemetery at a later date. Memorial contributions may be directed to wishes of the family. Expressions of sympathy may be shared with the family online at www.skorupskis.com.

The family of Mark Allen Riselay created this Life Tributes page to make it easy to share your memories.

Send flowers to the Riselay family.