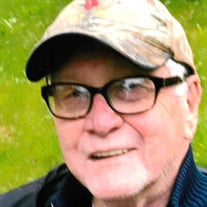 Martin John DeBats, 83, of Bay City, our caring, humorous, and most devoted father, grandfather, brother, uncle, and friend passed away on Wednesday, March 10, 2021. Martin was born in Bay City on September 27, 1937, the son of the late John and Dorothy (Gerard) DeBats. He graduated from Bay City Central High School, and proudly served our country in the U.S. Army, where he joined the Army Band. While in high school, Martin met the former Judy Cahalan. Martin was united in marriage to his high school sweetheart in 1959; a wonderful marriage that was blessed with three beautiful daughters. Martin retired from Bay County in 1999, where he worked in maintenance for many years. An all-around handyman, he was a "Jack of All Trades" who would help anyone in need. In his free time, he enjoyed spending time enjoying the great outdoors, especially fishing up north at the family cabin. Very musically inclined, Martin was in several bands, where he played the saxophone. He was a lover of jazz and polka. Martin's humorous and fun-loving ways will forever live on. He leaves to carry on his legacy, his three daughters, Julie (Mark) Woods, Mary (Robert) Buchanan, and Barb (Ken) Drabik; grandchildren, Matthew (Kim) Buchanan, Ashley Connally, Jay (Ashley) Buchanan, Alex Drabik, and Brendan Woods; great-grandchildren, Alyssa, Reagan, Jordan, Ryan, Liam, and Mae; sister, Carolyn, along with many nieces, nephews, and friends. In addition to his parents, Martin was welcomed home to heaven by his sister, Gladys Chambers. Martin’s family will be present to receive visitors on Friday, March 19, 2021, from 4:00 PM until 8:00 PM at Skorupski Family Funeral Home & Cremation Services, 821 N. Pine Rd., between Ridge & Center. The entire family wishes to extend a heartfelt thanks to those who stayed by Martin through thick and thin, especially his nephew, Ross, and dear friends, Dan Duso, Don Hollsinger, and Lynn Butterfield. Memorial contributions may be directed to the wishes of the family. Expressions of sympathy may be shared with the family online at www.skorupskis.com.

Martin John DeBats, 83, of Bay City, our caring, humorous, and most devoted father, grandfather, brother, uncle, and friend passed away on Wednesday, March 10, 2021. Martin was born in Bay City on September 27, 1937, the son of the late John... View Obituary & Service Information

The family of Martin John DeBats created this Life Tributes page to make it easy to share your memories.

Send flowers to the DeBats family.