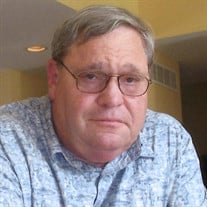 Michael Arthur Bolander, of Bay City, 73, our generous, witty, hard-working, and dedicated, husband, father, grandfather, and brother passed away in the early morning hours of Friday, December 11, 2020, at Covenant-Cooper after a brave battle with leukemia and COVID-19. Michael was born on June 16, 1947, in Bay City to Paul and Eva (Haskell) Bolander. Michael was raised alongside his four siblings and graduated from T.L. Handy High School in 1965. Growing up, Michael spent many years trout fishing and duck hunting with his father and Uncle Phil. In 1972, Michael was united in marriage to the love of his life, the former, Patricia Malecki at St. Stanislaus Kostka Church in Bay City. Together they celebrated 48 years of marriage and their three children. Michael held many mechanical licenses with the state of Michigan and ended his career after 20 years of service as a vehicle supervisor for the City of Bay City. He was a lifetime fishing, boating, cooking, and electronics enthusiast, passing these interests onto his three children. He also enjoyed many years building and flying R/C planes with his brothers, Paul and Dave. Above all, Michael was a proud and devoted family man. Living to cherish their memories of Michael is his wife of 48 years Patricia; children, Michelle (Rolland) Rieger, Michael (Jessica DeLong) Bolander, and Marcus (Joan Cotterman) Bolander; beloved grandson, Rolland J. Rieger; brothers, Paul A. (Patty) Bolander and David (Sandy) Bolander; brothers-in-law, Dr. Robert (Michaele) Malecki, and Michael (Donna) Malecki; and many nieces and nephews and their spouses. He is preceded in death by his parents; sister, Beverly (John) Webb, and brother, Edward (Kay) Bolander. Cremation rites have been accorded and Michael has been laid to rest at St. Stanislaus Kostka Cemetery, Bay City. Those planning to make an expression of sympathy may wish to consider our Lady of Czestochowa Parish. Final arrangements have been entrusted to Skorupski Family Funeral Home & Cremation Services, 821 N. Pine Rd., between Ridge & Center. Expressions of sympathy may be shared with the family online at www.skorupskis.com.

The family of Michael Arthur Bolander created this Life Tributes page to make it easy to share your memories.

Send flowers to the Bolander family.